The civil war in Syria is in its tenth year and has devastated the lives of millions. More than half of the population has been displaced, including six million people within Syria and a further 5.5 million who have fled the country. According to the United Nations, more than 8.7 million Syrians need livelihood support and 11.7 million need humanitarian assistance; half of the remaining workforce cannot access employment. Hyperinflation, economic sanctions and extensive damage to infrastructure, housing, health and education facilities have devastated Syria’s economy. With school buildings targeted by bombings and teachers and academics killed or exiled, many schools and universities have been forced to close. The lack of safe learning spaces, societal tensions, the threat of violence and increasing widespread poverty also prevent children and young people from accessing education. Young women are the most marginalised, leaving them vulnerable to illiteracy, child labour and early marriage. In the northwest of the country millions of people are trapped along the border with Turkey in an active war zone, unable to receive emergency aid in response to the COVID-19 pandemic. In his Easter message, His Beatitude Ignatius Joseph III Younan, Patriarch of Antioch and all the East, said: “The situation in Syria is a terrible catastrophe which has surpassed the brutality of the emperors of time, past invaders, and occupiers. Ten years of war, killing, destruction, and the international conflict on its soil have only led to the abuse of the Syrian people and the destruction of its economic, social, and civilizational structure.”

Why we need your help

Without access to education and psychological support, the future of an entire generation of Syrian children is threatened. FACE is working in partnership with its sister branch, L’Oeuvre d’Orient, to make sure that vulnerable children in Syria can access education and essential services. 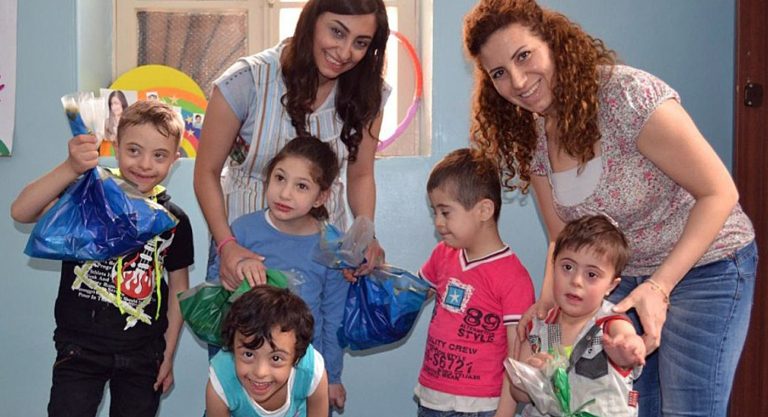 Your donation will help the following projects:

Working in partnership with the Maronite Diocese, the Foshet Sama centre provides education to 600 vulnerable children students across four locations in Aleppo, and at a new centre with 100 students at Hama. 80 per cent of students are girls or young women, mostly Sunni Muslim, who have escaped from areas occupied by ISIS and other armed groups. “Foshet Sama” offers a vital sense of normality and safety to its students and provides education up to baccalaureate level to children aged between eight and eighteen. Foshet Sama urgently needs support to continue providing education and vital services to vulnerable children and their families in Syria:

Le Senevé Day Care Centre for children with disabilities in Homs, run by the Society of the Sacred Heart of Jesus

Founded 2006, the centre was hit by bombings and moved to a safer location in 2012. Run by Sister Samia and her team of 36 staff, Le Senevé promotes peace and understanding between the different ethnic communities, raising awareness of disabilities and providing support to children with disabilities and their families. There are currently 97 students – 69 children aged between 4 and 14,  and 28 young people aged between 15 and 25. Children attend learning sessions every day on key subjects including writing, mathematics, development of the imagination and speech. They also learn life skills that promote their independence, such as personal hygiene, eating together, tidying up and basic household chores. Theatre and music workshops enable them to express themselves and to grow in confidence, while computing classes provide a new communication tool, particularly beneficial for children with speech impediments. The Sisters urgently need support for the running of the centre in order to provide the following services in the coming year:

The Rosary School, Aleppo, run by the Congregation of the Rosary Sisters of Jerusalem

In 2009, the Congregation of the Rosary Sisters of Jerusalem built a school in Aleppo, offering education for pupils aged 3 to 18. The school, named the Rosary School, opened its doors in 2010 and occupied four large buildings built on extensive grounds, replete with modern furniture, computers, libraries, sports halls, an arts hall with musical instruments, and a swimming pool.

In 2011, the civil war forced the Rosary Sisters to close the school and relocate to a safer area in Aleppo. The school was confiscated and occupied by armed groups until 2020. Located at El Khell Gate, where intense fighting had taken place, the school had also been used as a field hospital by militants. In 2020, when the armed groups retreated from Jabal Semaan and Aleppo was liberated, the Sisters returned to find their school in ruins.

Thanks to funding from our sister agency, Oeuvre d’Orient, the project to rebuild the Rosary School is well under way and nearing completion. The rebuilding of the Primary School (for children aged 6 to 11) is almost complete.

FACE and Oeuvre d’Orient are now seeking funds to rebuild the two-storey building which will house the Nursery/Pre-school and Foundation Years 1 and 2 (for children aged 2 to 6), with, on the ground floor, nine classrooms for 225 nursery pupils, two activity rooms and one office, and, on the first floor, six classrooms for 75 nursery pupils and six rooms for ballet, library, staff room, gym, storage, and the head teachers’ office.

Your donation will enable us, through our partnerships on the ground, to deliver quick and effective support to vulnerable communities in war-torn Syria.

You will bring a message of love, solidarity and hope to our brothers and sisters in Syria.

Now more than ever they need our support.