Reflection on the Feast of St Thomas 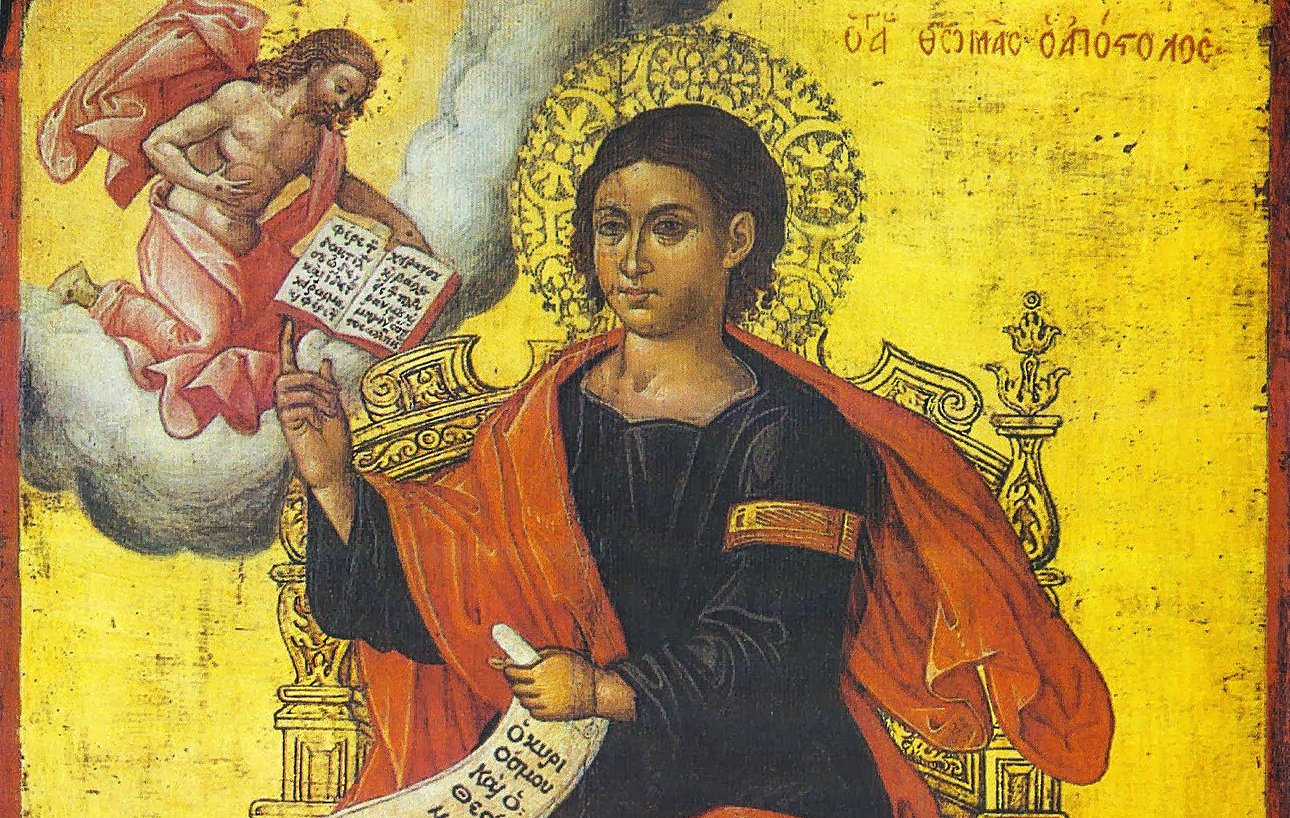 Thomas, called the Twin, who was one of the Twelve, was not with them when Jesus came.

When the disciples said, ‘we have seen the Lord’, he answered, ‘Unless I see the holes that the nails made in his hands and can put my finger into the holes they made, and unless I can put my hand into his side, I refuse to believe.’

Eight days later the disciples were in the house again and Thomas was with them.  The doors were closed, but Jesus came in and stood among them.  ‘Peace be with you’ he said.

Then he spoke to Thomas, ‘Put your finger here; look, here are my hands.  Give me your hand; put it into my side.  Doubt no longer but believe.’  Thomas replied, ‘My Lord and my God!’

Jesus said to him: ‘You believe because you can see me.

Happy are those who have not seen and yet believe.’

I am writing this Reflection on the Solemnity of St Peter and St Paul.  While they were to die for the Catholic Faith in Rome, St Thomas, also one of the Twelve, was to go in a different direction to the East through Persia to India with the good news of Jesus Christ.

We do not have the same detail of the journeys of Thomas and his companions as we have through the Book of the Acts of the Apostles of the journeys for St Peter and St Paul, who eventually arrived in Rome to the West.  However, we are blessed today to know more of the journey of Thomas through Eastern Catholic Christians now living among us.

Dr Subhi Zora, a Sub Deacon in the Chaldean Church, and originally from Mosul in Iraq has written about the history of Churches there, and St Thomas travelled through Mesopotamia, the land between the great rivers Tigris and Euphrates, through Persia into India.  The Faithful in the Chaldean Catholic Community in Iraq, and the Syro Malabar and Syro Malankara Catholic Communities in Kerala, India, look to St Thomas and his companions as their first Evangelizers in the first century.

Pope Francis recently visited Iraq and celebrated the Eucharist in the Chaldean Rite, as I have done by the invitation of Fr Andrawis Toma, who celebrates Mass for the Chaldean Catholics in the Midlands.  I have also celebrated Mass with the Syro Malabar and Syro Malankara Catholic communities.  Father Terin Mullakkara is Parish Priest of the Rosary, Saltly, in Birmingham, and he told me about the 7 communities in Kerala who will be marking the Feast of St Thomas on 3rd July with Baptisms in pools of water where St Thomas Baptised, when he took the Faith there.

We often think of St Thomas as the one who doubted that Jesus had Risen.  And, in his Homily on St Thomas, St Gregory the Great speaks of the gift that Thomas is to all who need assurance of the Resurrection of Our Lord.  On the second occasion that Jesus appeared to the Apostles, Thomas was there and saw for Himself.  The Scripture record his words: “my Lord and my God”.  Another commentator reflects that Thomas was absent from the Community of the disciples and that was why he missed the opportunity to discover the Risen Jesus for himself.  The good news for us in the West is that the Catholic Bishops in the East have sent priests to us to accompany their people so that they can still experience the Community of Faith they had back home, where Jesus is present in the Liturgy and Sacraments in different languages and Rites.

On this Feast of St Thomas we give thanks that, after so many years, we are getting to know more about the Apostolic work of St Thomas, and to experience the Faith and Devotion he planted among Christians of the East. We thank God for their faith and witness among us, which lead us to more insights into the teaching of Jesus.

St Thomas died a martyr for the Faith near Madras, India and his body was taken to Edessa (present-day Turkey) in the 4th Century. 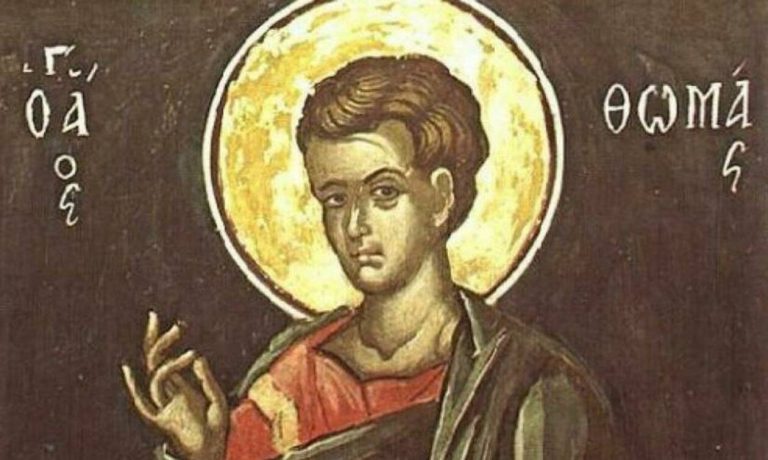 The prayer is the Collect of the Feast.

that we may glory in the Feast of the blessed Apostle Thomas,

so that we may always be sustained by his intercession

and, believing, may have life

in the name of Jesus Christ your Son,

whom Thomas acknowledged as the Lord.

Who lives and reigns with you in the unity of the Holy Spirit,

One God, forever and ever.

St. Thomas was born a Jew and was called to be one of the twelve Apostles. His birth and death dates are unknown, but his feast day is celebrated July 3. He lived before the formal establishment of the Catholic Church but is recognized as the patron saint of architects.

He was a dedicated but impetuous follower of Christ. When Jesus said He was returning to Judea to visit His sick friend Lazarus, Thomas immediately exhorted the other Apostles to accompany Him on the trip which involved certain danger and possible death because of the mounting hostility of the authorities.

At the Last Supper, when Christ told His disciples that He was going to prepare a place for them to which they also might come because they knew both the place and the way, Thomas pleaded that they did not understand and received the beautiful assurance that Christ is the Way, the Truth, and the Life.

St. Thomas is best known for his role in verifying the Resurrection of his Master. Thomas’ unwillingness to believe that the other Apostles had seen their risen Lord on the first Easter Sunday earned him the title of “doubting Thomas.”

Eight days later, on Christ’s second apparition, Thomas was gently rebuked for his skepticism and furnished with the evidence he had demanded – seeing in Christ’s hands the point of the nails. Thomas even put his fingers in the nail holes and his hand into Christ’s side. After verifying the wounds were true, St. Thomas became convinced of the reality of the Resurrection and exclaimed, “My Lord and My God,” thus making a public Profession of Faith in the Divinity of Jesus.

St. Thomas is also mentioned as being present at another Resurrection appearance of Jesus – at Lake Tiberias, when a miraculous catch of fish occurred.

This is all that we know about St. Thomas from the New Testament. Tradition says that at the dispersal of the Apostles after Pentecost this saint was sent to evangelize to the Parthians, Medes, and Persians. He ultimately reached India, carrying the Faith to the Malabar coast, which still boasts a large native population calling themselves “Christians of St. Thomas.”

According to tradition, Thomas was killed in an accident when a fowler shot at a peacock and struck Thomas instead. Following his death, some of his relics were taken to Edessa while the rest were kept in what is now known as India. They can still be found within the San Thome Basilica in Chennai, Mylapore, India.

The relics taken to Edessa were moved in 1258 to Italy, where they can be found in the Cathedral of St. Thomas the Apostle in Ortona, Italy. However, it is believed that Saint Thomas’ skull rests in the Monastery of Saint John the Theologian on the Greek Island Patmos.

In art, Saint Thomas is commonly depicted as a young man holding a scroll, or as a young adult touching the resurrected Christ’s wounds.

Saint Thomas was mentioned in several texts, including one document called The Passing of Mary, which claims then-apostle Thomas was the only one to witness the Assumption of Mary into heaven, while the other apostles were transported to Jerusalem to witness her death.

While the other apostles were with Mary, Thomas was left in India until after her first burial, when he was transported to her tomb and he saw her bodily assumption into heaven, when her girdle was left behind.

In versions of the story, the other apostles doubted Thomas’ words until Mary’s tomb was discovered to be empty with the exception of her girdle. Thomas and the girdle were often depicted in medieval and early Renaissance art.