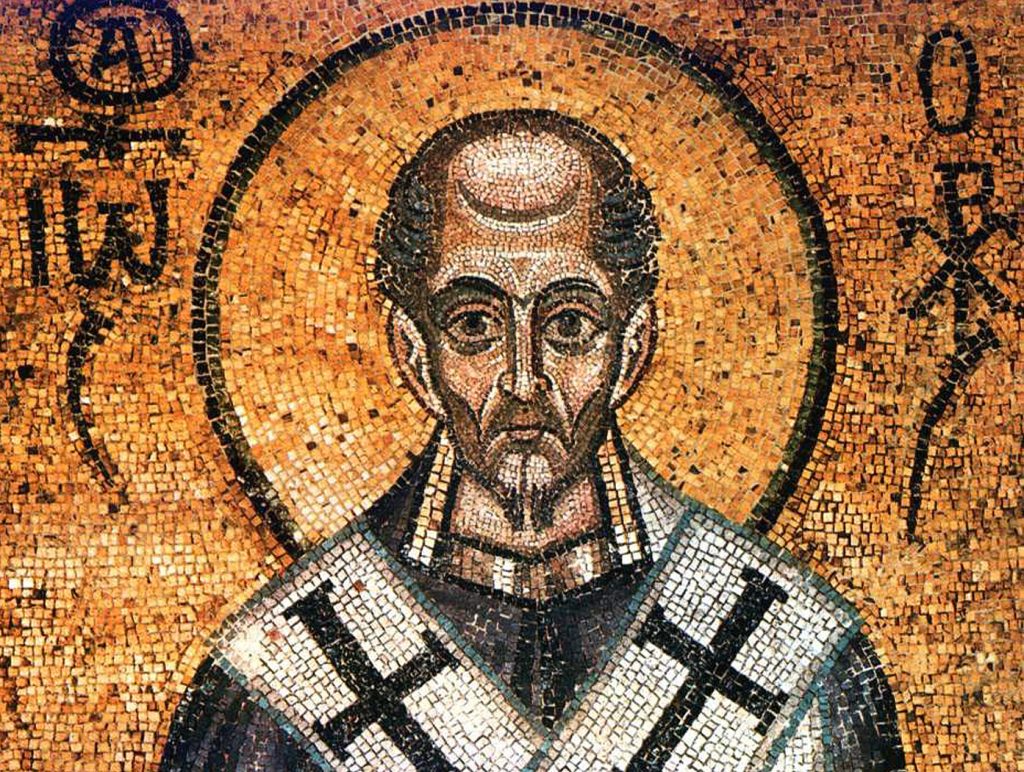 I, Paul, the prisoner in the Lord, beg you to lead a life worthy of the calling to which you have been called, with all humility and gentleness, with patience, bearing with one another in love, making every effort to maintain the unity of the Spirit in the bond of peace. There is one body and one Spirit, just as you were called to the one hope of your calling, one Lord, one faith, one baptism, one God and Father of all, Who is above all and through all and in all.

But each of us was given grace according to the measure of Christ’s gift. The gifts He gave were that some would be apostles, some prophets, some evangelists, some pastors and teachers, to equip the saints for the work of ministry, for building up the body of Christ, until all of us come to the unity of the faith and of the knowledge of the Son of God, to maturity, to the measure of the full stature of Christ.

by Father Mark Woodruff, Chairman of the Society of St John Chrysostom; and Principal Advisor to Fellowship and Aid to the Christians of the East (FACE).

At first sight, St Paul’s address to the new Christians of Ephesus, on the western coast of what is now Turkey, is about our faith in the Persons of the Holy Trinity and the gifts with which our baptism has equipped us to serve the building up of all humanity into the body of Christ. So indeed it is. But look again, and St Paul is saying that this first comes out of a lived experience of adversity (his imprisonment), sacrifice of self (humility), endurance (patience, and bearing with others) and redemption that take what is amiss and converts it permanently into good (love marked by forgiveness, and God’s calling that makes good on hope), because the body into which we are baptised is that of the Father’s Son nailed to the Cross, which He endured to bring our salvation into effect.

St John is a second St Paul. His eloquence and spiritual imagination flow through abundant writings. His 1687 letters and sermons reveal a lively mind, beautifully communicating from his direct encounter with Christ, and a faith distilled through adversity for His sake. His preaching gained him the title ‘Chrysostomos’, the Golden Mouth, not only because what he said warmed people’s hearts and convinced their belief and discipleship, but because it rang true coming from John. What Paul said of himself is true of Chrysostom too: “In my flesh, I am filling up what is lacking in Christ’s afflictions for the sake of his body, that is, the Church.” How did this life take shape?

He was born in the third city of the eastern Roman empire, Antioch, in around 345. An outstanding literary, philosophy and rhetoric scholar with a successful public career ahead of him, in 374 he chose instead to live for God in the severely ascetical life of a monk. It was not until 386 that he was ordained priest, when his exceptional oratorical skills were revealed in the straightforward practicality, vivid imagery and convincing moral appeal of his sermons, as well as the rich insight of his commentaries on the Scriptures. Having brought about the reconciliation of the sees of Antioch and Alexandria with old Rome after a loss of communion for seven decades, in 397 he was the outstanding candidate to be the new Archbishop of new Rome, the capital of the Christian Roman Empire, Constantinople. The people of Antioch did not wish to lose him, so to evade opposition to his election, he left in secret to be consecrated away from the public eye.

Immediately, the consequence of faithful preaching “in season and out of season” in Constantinople began. While his inspiring illustrations of the Scriptures and his clear preaching, applying Christ and faith to real life, endeared him to the people, he inevitably showed up the lax lifestyles and the moral injustices of the rich and powerful. The empress Eudoxia flattered herself that these barbs were aimed, above all, at her. A synod was trumped up to depose him for supposed unorthodox teaching. Her husband, the emperor Arcadius, then exiled him in 403 to Pontus on the Black Sea coast. The people of Constantinople were in uproar. An earthquake frightened Eudoxia to thinking it too was all about her. Promising amendment, she begged the emperor for St John’s recall to appease God. Yet within months she would erect a silver statue of herself outside the Great Church of Hagia Sophia. The Golden-Mouthed John, whose triumphant return made his words more potent than ever, kept speaking vividly about the contrast between the life in Christ shown in the Scriptures and the moral shortcomings of those in power in a supposedly Christian empire, this time singling out Eudoxia. The following June he was banished inland, to the remote edge of the province of Cilicia. There were riots in Constantinople, and the first Hagia Sophia was burned down. St John continued to teach his people by letters. He was also able to correspond with Pope Innocent I in old Rome, who sent a delegation to the emperor to convene a Council to reinstate the patriarch of new Rome. Chrysostom’s powerful enemies, however, convinced Arcadius that the archbishop had insulted the emperor by contacting the pope, and now posed a threat. So in 407 St John was banished to even more remote exile in Pityus, a port on the eastern edge of the Black Sea. 310 guards ensured no one prevented his removal once and for all. The journey was harsh because of the terrain and the elements, some of the soldiers were cruel, and Chrysostom, now about 60, was weak, not having enjoyed strong health since the extreme asceticism of his time as a hermit. He did not make it beyond Cumana in Pontus, not far from where he had been exiled four years earlier, and he died on the feast of the Exaltation of the Holy Cross on 14th September, saying, “Glory be to God in all things”.

Thus, like St Paul, a “prisoner in the Lord,” by the public humiliation and the physical afflictions he endured, he was indeed in his flesh “filling up what is lacking in Christ’s afflictions for the sake of his body, that is, the Church”. Eudoxia and Arcadius failed to silence him or put the Church in its place. Instead, his faithful confession of Christ despite persecution, was “Christ’s gift” of an apostle and a teacher, who “built … up the body of Christ” towards our even deeper “knowledge of the Son of God, to maturity, to the measure of the full stature of Christ.”

In the Orthodox Church, St John Chrysostom is revered as one of the Three Holy Hierarchs, along with St Basil the Great of Caesarea and St Gregory the Theologian of Nazianzus. In the Latin Church they are venerated as three of the Greek Doctors of the Universal Church, on account of their decisive and compelling teaching on Christ and the Trinity, that remains formative of the faith and worship of the Church in East and West to this day. Indeed the form of the Eucharist most often celebrated in the Eastern Orthodox and the Greek Catholic Churches is the Divine Liturgy of St John Chrysostom, believed to have been abbreviated under his influence for the practical purpose of the greater engagement and spiritual enrichment of the people.

His feast in the West is kept on the 13th September, the day before his death, while in the East it is transferred two months later to 13th November. He is the patron of the city of Constantinople where its Christians are today reduced to a few thousand, pressed on all sides by an almost entirely Turkish Muslim population and government, yet determined, “with patience”, like St Paul’s, to preserve the living roots of Byzantine Christianity for 260 million Orthodox worldwide. (Byzantium is the older name for the city of Constantinople). He is also the patron of Christian educators, lecturers and preachers who “lead a life worthy of the calling to which you have been called.”

Troparion for November 13 in the Byzantine Rite

Grace shone forth from your mouth like a fiery beacon and enlightened the universe, bestowing on the world not the treasures of greed, but rather showing us the heights of humility. As you teach us by your words, O John the Golden-Mouthed, our father, intercede with the Word, Christ our God, for the salvation of our souls.

Kontakion for November 13 in the Byzantine Rite

From heaven you received divine grace; your lips have taught us all to worship the Triune God, O blessed John Chrysostom. It is fitting that we praise you, for you are a teacher, clarifying all things Divine.

Collect for September 13 from the Roman Missal

O God, strength of those who hope in You, Who willed that the Bishop Saint John Chrysostom should be illustrious by his wonderful eloquence and his experience of suffering: grant us, we pray, that, instructed by his teachings, we may be strengthened by his invincible patience. Through our Lord Jesus Christ, Your Son, Who lives and reigns with You in the unity of the Holy Spirit, God, for ever and ever.

John Chrysostom died in the city of Comana in the year 407 on his way to his place of exile. There his relics remained until 438 when, thirty years after his death, they were transferred to Constantinople during the reign of the empress Eudoxia’s son, the emperor Theodosius II (408–450), under the guidance of John’s disciple, Proclus, who by that time had become archbishop of Constantinople (434–447).

Most of John’s relics were looted from Constantinople by Crusaders in 1204 and taken to Rome, but some of his bones were returned to the Orthodox Church on 27 November 2004 by Pope John Paul II.  Since 2004 the relics have been enshrined in the Church of St. George, Istanbul.

The skull, however, having been kept at the monastery at Vatopedi on Mount Athos in northern Greece, was not among the relics that were taken by the crusaders in the 13th century. In 1655, at the request of Tsar Alexei Mikhailovich, the skull was taken to Russia, for which the monastery was compensated in the sum of 2000 rubles. In 1693, having received a request from the Vatopedi Monastery for the return of Saint John’s skull, Tsar Peter the Great ordered that the skull remain in Russia but that the monastery was to be paid 500 rubles every four years. The Russian state archives document these payments up until 1735. The skull was kept at the Moscow Kremlin, in the Cathedral of the Dormition of the Mother of God, until 1920, when it was confiscated by the Soviets and placed in the Museum of Silver Antiquities. In 1988, in connection with the 1000th Anniversary of the Baptism of Russia, the head, along with other important relics, was returned to the Russian Orthodox Church and kept at the Epiphany Cathedral, until being moved to the Cathedral of Christ the Saviour after its restoration.

Today, the monastery at Vatopedi posits a rival claim to possessing the skull of John Chrysostom, and there a skull is venerated by pilgrims to the monastery as that of Saint John. Two sites in Italy also claim to have the saint’s skull: the Basilica di Santa Maria del Fiore in Florence and the Dal Pozzo chapel in Pisa.

Shashamane School for the Blind, Ethiopia, run by the Franciscan Sisters of St Mary of the Angels.  For further information on our education projects, please click on this link: