Reflection on St John of Damascus 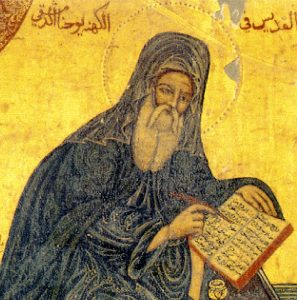 For it will be as when a man going on a journey called his servants and entrusted to them his property; to one he gave five talents, to another two, to another one, to each according to his ability. Then he went away.

Reflection on St John of Damascus

One of the stress points in contemporary society is the friction between two great “religions of the book”, Islam and Christianity; and it may be that St John of Damascus, whose feast we  celebrate on December 4th (the day on which he died, probably in 749) would be an excellent patron saint for those who want to pursue the issue. For he was a gifted and devout theologian, strong on the Assumption/Dormition of Our Lady, and on the doctrine of “perichoresis”, what you might call the “dance of the Holy Trinity”; and it was also his way of expressing the relationship between Christ’s divine and human natures. He was very much a Damascene, entirely at home in the Arabic culture of his native city, where his father was an important official, as indeed some sources suggest that John himself may have been before he heard the call to the monastic life. It looks as though he was bilingual in Arabic and Greek. He ended up as a monk of the monastery of Mar Saba, near Bethlehem, which you can still visit today, and where he probably died on this day in 749.

He was a prodigious author. Of particular interest is his “Fountain of Knowledge”, but there are many other surviving works, too much neglected in our time. It is probably fair to say that he was an intelligent summariser of what had gone before rather than an innovative thinker. He also wrote many fine hymns, some still in use in Eastern liturgies today.

He also seems to have been well acquainted with the Quran, though it would be inaccurate to describe him as a pioneer of inter-religious dialogue, since his remarks about Islam were quite polemic, concentrating on areas of disagreement rather than common ground. This was very much of his time; but he did at least defend Muslim use of the Old Testament.

In particular, he defended the use of icons, with at least three treatises against the Iconoclastic movement, which sought to destroy icons, which are so important in Eastern Christianity. They are always produced in an atmosphere of prayer.  Doubtless that is why they function so readily as a window into the other world. In that sense, John is a good saint to celebrate during this time of Advent, on which we have just embarked, when we are invited prayerfully to contemplate the “icon” of Christ, for whose coming we are preparing in the present season.

The reading offered today by the Catholic Church is Matthew’s extraordinary parable of the “Talents”, a vivid icon of God’s remarkable generosity to us, and the generous response expected on our part. Certainly it fits the life of John Damascene admirably. Today, and especially in the Middle East, we have need of a Spirit-filled dialogue between Muslims and Christians.

that we may be helped by the prayers of the Priest Saint John Damascene,

so that the true faith which he excelled in teaching

may always be our light and our strength.

May his intercession defend in particular Eastern Christians

from discrimation and persecution of all kinds.

Through Christ Our Lord.

Among Eastern Christians, St. John Damascene (676-749) is best known for his defence of Christian sacred art, particularly in the form of icons. While the churches of Rome and Constantinople were still united during St. John’s life, the Byzantine Emperor Leo III broke radically from the ancient tradition of the church, charging that the veneration of Christian icons was a form of idolatry.

John had grown up under Muslim rule in Damascus, as the child of strongly Christian parents. His excellent education – particularly in theology – prepared him well to defend the tradition of sacred iconography, against the heresy of the ‘iconoclasts’, so-called because they would enter churches and destroy the images therein.

During the 720s, the upstart theologian began publicly opposing the emperor’s command against sacred images in a series of writings. The heart of his argument was twofold: first, that Christians did not actually worship images but rather, through them, they worshiped God and honoured the memory of the saints; second, he asserted that by taking an incarnate physical form Christ had given warrant to the Church’s depiction of him in images.

By 730, the young public official’s persistent defence of Christian artwork had made him a permanent enemy of the emperor, who had a letter forged in John’s name offering to betray the Muslim government of Damascus.

The ruling caliph of the city, taken in by the forgery, is said to have cut off John’s hand. The saint’s sole surviving biography states that the Virgin Mary acted to restore it miraculously. John eventually managed to convince the Muslim ruler of his innocence before making the decision to become a monk and later a priest.

Although a number of synods condemned John’s advocacy of Christian iconography, the Roman Church always regarded his position as a defence of apostolic tradition. Years after the priest and monk died, the Seventh Ecumenical Council vindicated his orthodoxy and ensured the permanent place of holy images in both Eastern and Western Christian piety.

St. John of Damascus’ other notable achievements include the Exact Exposition of the Orthodox Faith, a work in which he systematized the earlier Greek Fathers’ thinking about theological truths in light of philosophy. The work exerted a profound influence on St. Thomas Aquinas and subsequent scholastic theologians. Centuries later, St. John’s sermons on the Virgin Mary’s bodily assumption into heaven were cited in Pope Pius XII’s dogmatic definition on the subject.

The saint also contributed as an author and editor to some of the liturgical hymns and poetry that Eastern Orthodox and Eastern Catholics still use in their liturgy.