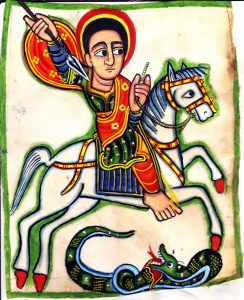 Feast in the Roman and Byzantine calendar: 23 April

“I am the true vine, and my Father is the gardener. He cuts off every branch in me that bears no fruit, while every branch that does bear fruit he prunes so that it will be even more fruitful. You are already clean because of the word I have spoken to you. Remain in me, as I also remain in you. No branch can bear fruit by itself; it must remain in the vine. Neither can you bear fruit unless you remain in me.

“I am the vine; you are the branches. If you remain in me and I in you, you will bear much fruit; apart from me you can do nothing. If you do not remain in me, you are like a branch that is thrown away and withers; such branches are picked up, thrown into the fire and burned. If you remain in me and my words remain in you, ask whatever you wish, and it will be done for you. This is to my Father’s glory, that you bear much fruit, showing yourselves to be my disciples.

…there is another warfare, in which we are all enlisted as Christians of which Paul speaks when he says: Labour as a good soldier of Christ; for no one is crowned, save they that strive lawfully. That we have to strive and fight during our life, the same Apostle assures us: Put on the armour of God, that you may be able to resist in the evil day, and to stand in all things perfect. Stand, therefore, having your loins girt about with truth, and having on the breastplate of justice, and your feed shod with the preparation of the Gospel of peace. In all things taking the shield of faith, wherewith you may be able to extinguish all the fiery darts of the most wicked one. And take unto yourself the helmet of salvation, and sword of the spirit, which is the word of God. We, then, are soldiers, as you were, O holy martyr!

…we must, henceforth, prove ourselves worthy of our position. In the Paschal Communion which we have received, we have a pledge of victory; how can we ever be so base as to permit ourselves to be conquered! Watch over us, O Holy Warrior! Let your prayers and example encourage us to fight against the dragon of hell. He dreads the armour we wear; for it is Jesus himself that prepared it for us, and tempered it in his own precious Blood; may we, like you, present it to him whole and entire, when he calls us to our eternal rest!


It is time that those of us in England rescued our patron saint from all kinds of prejudices often associated with the more unpleasant traits of nationalistic hooliganism. Elements in our public life have often wanted to get rid of him, but this is short-sighted because George is a saint who can bind us to many faiths, nationalities and places. Far from being dismissed as a mythological figure with uncertain provenance, our beloved George is a figure much venerated in East and West. The red cross of St George on a white background is an ancient symbol of the resurrection which is adopted as the national flag of England and the flag of Palestinian Christians. For those of us involved with FACE, it is notable that Saint George is among the most celebrated saints in Syria, particularly amongst Christians of the Antiochian tradition.  The Monastery of Saint George in Meshtaye, near the city of Homs, is an Orthodox religious complex dating back to the 5th century, and one of the most visited pilgrimage sites for local and foreign pilgrims, who arrive for the feast of Saint George and the feast of the elevation of the Holy Cross.

George’s life may seem obscure, but it is probably far better known than that of many other saints and historical cultic figures. Let us step back to wonder at such a saint, for George is greatly, widely and lovingly venerated. His influence is all over the Middle East, in Slav lands, as well as in India, where he is venerated particularly in the Syro-Malbar Rite. One of the main pilgrimage sites to St. George is in Kerala, at Edappally, where his feast is celebrated on 4 May.

How many of us realise that George is not only the Patron Saint of England, but also of Georgia (that bears his name), Ethiopia, Portugal and Catalonia? He is venerated equally as the protector of Bulgaria and Moscow, with many cities dedicated to him, such as Beirut in Lebanon, Venice, Modica, Ragusa, Genoa in Italy, and Podgorica in Montenegro.

George was born in the 4th century AD near Cappadocia in modern Turkey, but it is believed that his mother was a Palestinian from Lydda and that he himself had connections to Al-khadar near Bethlehem; but what is definitely known is that he was undoubtedly martyred for his Christian faith under Diocletian and his remains moved to Lydda in Palestine where his tomb became a centre of pilgrimage. He was canonised in 494 AD by Pope Gelasius who recognised him as a martyr for the faith.  Subsequently the Eastern Church named George the ‘Great Martyr’. He was commemorated in England in the 9th century, and in the reign of Edward III in the 14th century, he became the patron saint of England. All of these fragments of knowledge point to a real person whose memory was taken up into the liturgical and spiritual life of the Christian Church and spread quickly throughout many lands.

On his feast day in 2014, the BBC published an article and aired a broadcast * explaining why St George is a Palestinian hero, and venerated by Christians, Muslims and Druze alike.   It is clear that ‘Palestinians see him as having set a powerful example for helping the needy and for bravely standing up resolutely for one’s beliefs’ – values for us to be inspired by and to emulate.

So, in reflecting on George, let us learn something important: not to let historical prejudice or animosity cloud our judgement, but to allow the voice of the Holy One to speak through the life and intercession of this saint. In so many ways, George as patron of England is profoundly relevant to us today in our multi-cultural society because, apart from being so much a part of our national culture, having been venerated as a much-loved saint for more than a thousand years, his ‘internationality’ bursts the boundaries of ethnicity, faiths and nationalism; he cannot be trapped into belonging to one group or even to one religion. In our more multi-layered culture, George speaks to us in several ways: as a symbol of our vocation to live out the witness to Christ in the Beatitudes; as a saint uniting East and West, reminding us to protect the ‘Living Stones of the Holy land’ and to care for them and the places of Christ – the places which were of course George’s own homeland; and as a saint who can be a source of goodwill, friendship and fraternity between Christian, Muslim and Druze.

For we Christians, George also captures values that we need today: a faith that stands firm in its witness to the triumph of the Cross and the Resurrection yet can reach out to the poor and needy of all cultures; a saint who belongs to all; a redoubtable warrior, not for glory and conquest, but for justice and truth.

Across two millennia George’s appeal has remained unabated.  Even the Reformation could not suppress him. And in our own recent history, he became part of that famous story of the visions of angels (or cavalry men) in September 1914, at the retreat from Mons, known as the appearance of the ‘Angel of Mons’. True or not, George has not deserted us, and he keeps reappearing. We ought therefore to make him better known and understood.  But our first task today is to ask his intercession for all in need, and especially to ask George, so greatly beloved by the Slavic nations, to intercede for peace in Ukraine.

Eusebius of Caesarea, the 4th century Greek historian of Christianity, in his History of the Church, records the early martyrs.  Although George is not mentioned by name, Eusebius makes mention of a martyr who is undoubtedly George, and he describes him as ‘a man of the greatest distinction’ who was sentenced to death by emperor Diocletian in Nicomedia on 23 April 303.

May St George help us to become people of distinction for Christ.

Article on St George as a saint who is venerated by Christians, Muslims and Druze alike:

From the Byzantine Tradition

Apolytikion: Fourth Tone
Liberator of captives, defender of the poor, physician of the sick, and champion of kings, O trophy-bearer, Great Martyr George, intercede with Christ God that our souls be saved.

Kontakion: Fourth Tone
Cultivated by God, you became manifest as an honourable tiller gathering for yourself the sheaves of virtue. For you sowed with tears but reaped with gladness; in the contest you competed with your blood and came away with Christ. By your intercessions, O Holy One, all are granted forgiveness of sins.

Ancient Collect from the Roman traditon
O God, who didst grant to St. George strength and constancy in the various torments which he sustained for our holy faith; we beseech Thee to preserve, through his intercession, our faith from wavering and doubt, so that we may serve Thee with a sincere heart faithfully unto death. Through Christ our Lord. Amen.

Collect C of E
God of hosts, who so kindled the flame of love in the heart of your servant George, that he bore witness to the risen Lord by his life and by his death: give us the same faith and power of love, that we who rejoice in his triumphs may come to share with him the fullness of the resurrection; through Jesus Christ your Son our Lord, who is alive and reigns with you, in the unity of the Holy Spirit, one God, now and for ever. Amen


Prayer for St George’s Intercession
All Merciful and Compassionate One, whose love reaches to the ends of the earth and encompasses all who live:
Hear us as we remember and celebrate George, soldier and good servant of Christ.  May we, like him, reach out to the poor and needy, open our hearts to the search for truth and justice and, asking his intercession, in all things seek to love and protect Your ‘little ones’; for the sake of the gospel.
Amen. 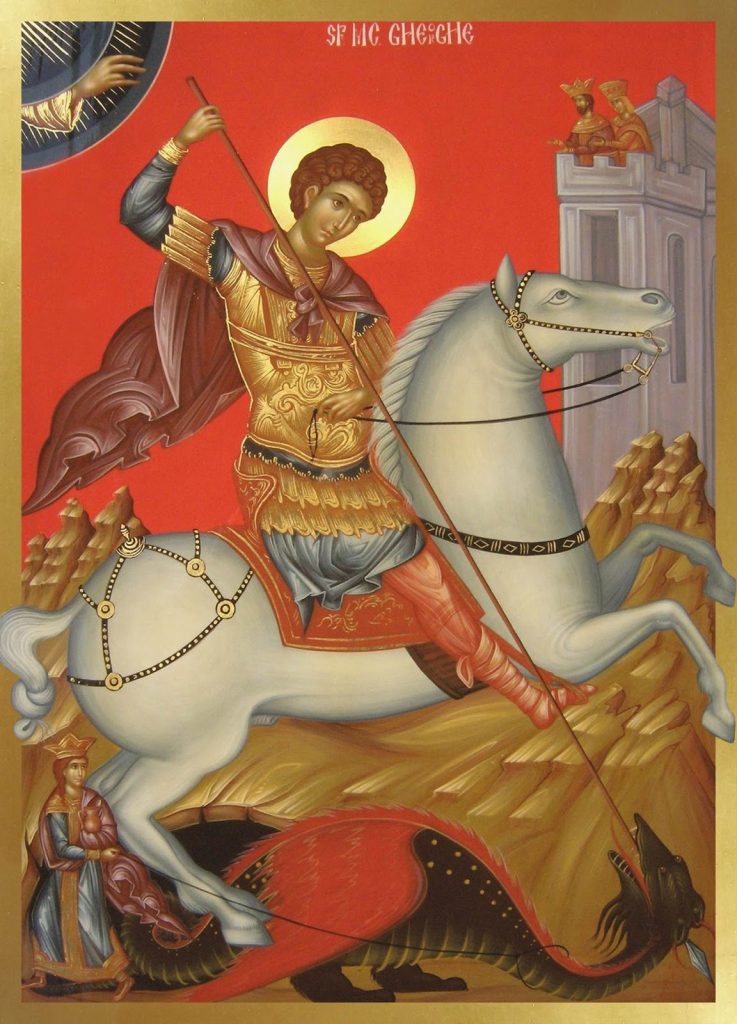