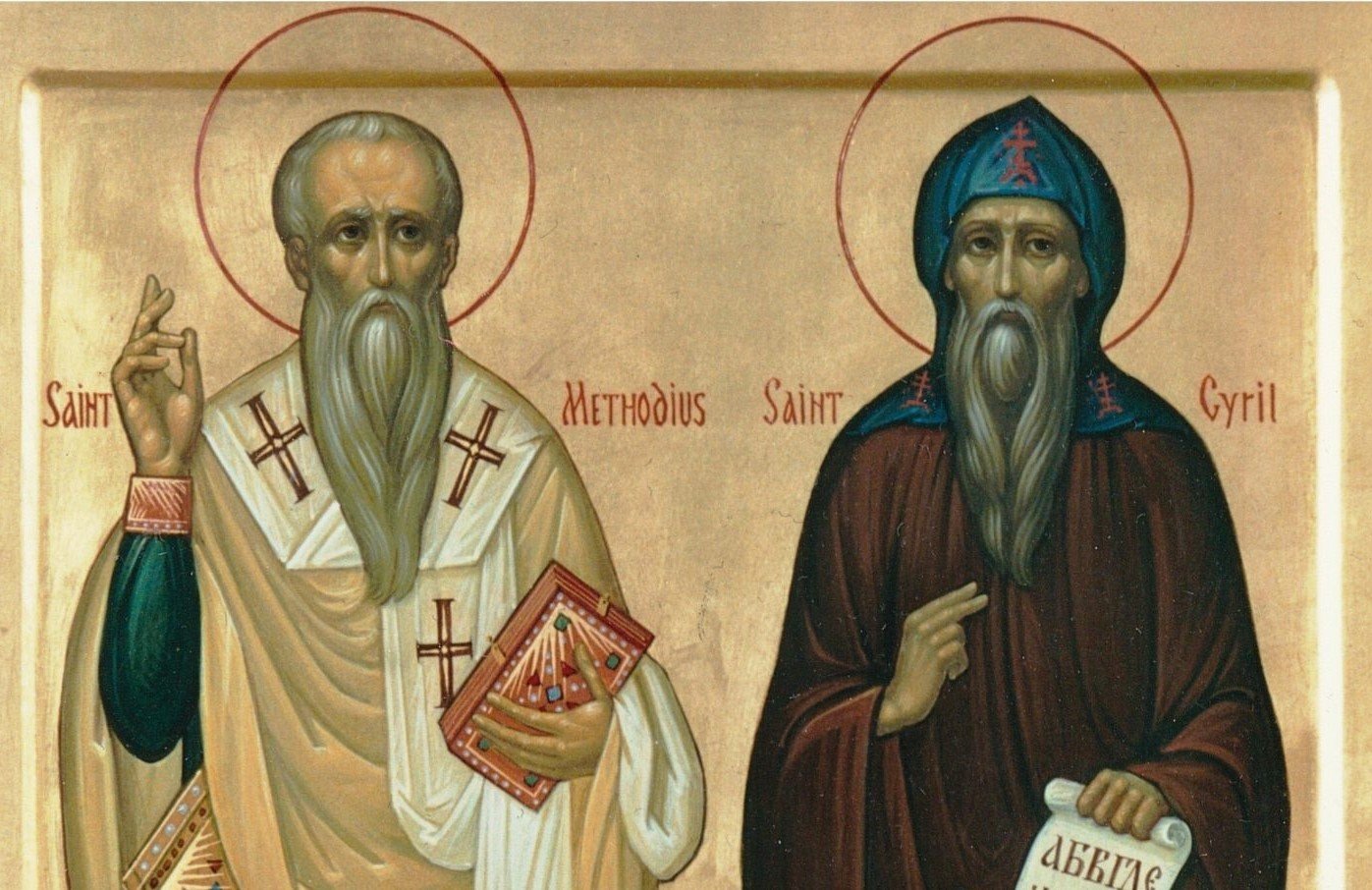 The two brothers Cyril (826–869) and Methodius (815–885) were Byzantine monks and theologians who became missionaries to the Slav peoples. For their work of evangelisation they are known as the “Apostles to the Slavs”. Pope John Paul II declared them co-Patrons of Europe with St Benedict of Nursia.

The Slavonic Life of Methodius reports in the following words the request made by the Prince Rastislav to the Emperor Michael III through his envoys: “Many Christian teachers have reached us from Italy, from Greece and from Germany, who instruct us in different ways. But we Slavs…have no one to direct us towards the truth and instruct us in an understandable way”.  It was then that Constantine and Methodius were invited to go there. Their profoundly Christian response to the invitation in this circumstance and on all similar occasions is admirably expressed by the words of Constantine to the Emperor: “However tired and physically worn out I am, I will go with joy to that land”; “with joy I depart for the sake of the Christian faith”.

The truth and the power of their missionary mandate came from the depths of the mystery of the Redemption, and their evangelizing work among the Slav peoples was to constitute an important link in the mission entrusted by the Saviour to the Church until the end of time. It was a fulfilment – in time and in concrete circumstances – of the words of Christ, who in the power of his Cross and Resurrection told the Apostles: “Preach the Gospel to the whole creation”.  “Go therefore and make disciples of all nations”.

The Lord Jesus appointed seventy-two disciples whom he sent ahead of him in pairs to every town and place he intended to visit.  He said to them, “The harvest is abundant but the laborers are few; so ask the master of the harvest to send out laborers for his harvest. Go on your way; behold, I am sending you like lambs among wolves. Carry no money bag, no sack, no sandals; and greet no one along the way. Into whatever house you enter, first say, ‘Peace to this household.’ If a peaceful person lives there, your peace will rest on him; but if not, it will return to you. Stay in the same house and eat and drink what is offered to you, for the labourer deserves his payment. Do not move about from one house to another. Whatever town you enter and they welcome you, eat what is set before you, cure the sick in it and say to them, ‘The Kingdom of God is at hand for you’.”

Reflection by Father Robin Gibbons, Advisor and Chaplain to FACE

In his encyclical Slavorum Apostoli (2 June 1985) St John Paul II gives a succinct biography of the two brothers Cyril and Methodius, but also puts before us their importance for the whole of Europe in our present age. It was in his Apostolic Letter Egregiae Virtutis (31 December 1980) that John Paul II proclaimed Cyril and Methodius  as co-patrons of Europe with St Benedict of Nursia. This was published to commemorate the centenary of the encyclical Grande munus (1880), by which Pope Leo XIII ‘brought to the attention of the entire Church the lives and apostolic work of Saints Cyril and Methodius, introducing at the same time their liturgical feast into the calendar of the Catholic Church’

This patronage was a prophetic gesture, one even now not quite understood, for it places as holy intercessors of a Europe, beyond the confines of a political union, three monastics, all of whom lived at a time before Constantinople and Rome were divided, when in the Church of our European ancestors there was no division between Eastern and Western Christianity.  We know, for example, of a Greek monk at Malmesbury Abbey in England, and  of Anglo-Saxon scribes at the monastery of St Catherine’s  Mount Sinai. Evidence from pilgrimage has opened our understanding of Christianity in this period as rich, vibrant, and cross cultural in many respects. This is important for it gives us a sense of religious inheritance, deep roots in the contemplative, educational, missionary and spiritual activity of these monastic men and women.

If we learn the story and gift of these saints, it might change our hearts and minds in the spirit of Conversio morum that Benedict calls his followers to observe, and which by proclaiming the Gospel the two brothers gave in their call of metanoia, repentance and new life to the Slavic peoples.

I would encourage us to read both of these gifts from John Paul II’s pontificate.  He fully understood the need to love Eastern and Western Christianity in the wider Catholic Church. It was the witness of those Eastern and Oriental Churches in communion with the Roman, Latin Rite at Vatican II that enabled various discussions to take place and new decisions to be made in the teaching of that Council, especially with regard to ecumenism and the sister status of all the Eastern Churches with Rome. The Melkite Patriarch Maximos IV, in particular should be mentioned, for it is he who first used the now famous phrase: ‘the Church breathes with both lungs, East and West’, and his interventions were a constant reminder of the Catholicity of the Eastern Churches.

The witness and ministry of Cyril and Methodius deserve wider recognition. To the Church in Slavic lands they gave new tools, a vernacular language for the Liturgy and Scripture, a new alphabet, inculturation in the acceptance of laudable and legitimate custom, tolerance of difference and of theological thought within the Church of Christ. John Paul points out these themes as a list of pointers for future thought, prayer and debate.   Let me highlight several areas that we too can use as a tool for a new evangelisation, a way of bridging the gap in a fractured Europe where we badly need something more than politics.

Heralds of the Gospel
Firstly, the brothers point to the constant mission of the Church to evangelise at all times and in all places. They were Byzantine in nature, but integrated their own training and theology into their mission to the Slavs, which enriched the Church. Using resources available to them they translated, adapted and entered into a profound dialogue with the Slavic culture. In this sense they are a good model for inculturation of Church and Society, opening out the Gospel to new forms of expression. ‘Perfect communion in love preserves the Church from all forms of particularism, ethnic exclusivism or racial prejudice, and from any nationalistic arrogance. This communion must elevate and sublimate every purely natural legitimate sentiment of the human heart’.

Church Planting
In terms of their adaptability, the two saints can be reflective mirrors of successful church planting, perhaps giving us a new direction. They were Hellenic in culture, Byzantine in tradition; they did not use a model of institutional unity; rather they amalgamated what was important and tried to keep a balance between diversity and unity.

Catholicity
In our own era, these saints point us to the central gift of being a Catholic: that we are not confined to one tradition, one place, one rigid set of observances, but are universal in the sense that our ecclesial identity is found in the community where we live, joined in communion with others.  As John Paul wrote of them, ‘In their wisdom, the treasury of the Church “things old and things new”, was transmitted through preaching and instruction in accordance with the eternal truths, at the same time being adapted to the concrete historical situation’. The tradition of Orthodox and Greek Catholic in Eastern Europe is a reminder that the Byzantine tradition is as much European in assimilated culture as the Roman tradition; they belong together, manifesting the unity of all in Christ, for the common good.

Gospel and Culture.
The last point that I have drawn from John Paul’s reflection is significantly acute for future directions of our faith. Though God was left out of the Constitution of the European Union, Christianity can never be excised from its roots, development and culture, nor should it be. At times when religion has looked as though it was on the back foot, women and men have appeared to call us back to that mission to proclaim the Good News. Cyril and Methodius, together with Benedict, are saints that challenge us to stand up and be counted, to renew our identity and mission, to be brave enough to inculturate and adapt rather than look back to a golden age that never existed. The Church of Christ is a pilgrim community on the march, not a rump closed in for defence: ‘By incarnating the Gospel in the native culture of the peoples which they were evangelizing, Saints Cyril and Methodius were especially meritorious for the formation and development of that same culture, or rather of many cultures’.  May they help us now.

Prayers
Equals of the Apostles and Teachers of the Slavs, Cyril and Methodius – Troparion & Kontakion

Troparion — Tone 4
Divinely-wise Cyril and Methodius, equals-to-the-apostles and teachers of the Slavs, entreat the Master of all to strengthen all nations in Orthodoxy and unity of mind, to grant peace to the world and to save our souls.

Kontakion — Tone 3
Let us honour the sacred pair, who translated divine scripture, pouring forth a fountain of divine knowledge from which we still draw today. Now as you stand before the throne of the Most-high, we call you blessed, Cyril and Methodius, as you fervently pray for our souls.

Collect ICEL 2010
O God, who enlightened the Slavic peoples through the brothers Saints Cyril and Methodius, grant that our hearts may grasp the words of your teaching, and perfect us as a people of one accord in true faith and right confession. Through our Lord.

Prayers taken and adapted from St John Paul II Slavorum apostoli
Almighty God, through the intercession of the two holy Brothers, grant that all Europe may feel ever more strongly the need for religious and Christian unity, for communion between all its peoples in the common awareness of the truth; so that when incomprehension and mutual distrust have been overcome, when ideological conflicts have been conquered, it may be for the whole world an example of just and peaceful coexistence in mutual respect and liberty. Amen

We thank you, Triune and Holy One, who called the Slav nations into the communion of the faith through the ministry and work of Cyril and Methodius, and we give thanks for this heritage and for the contribution made by them to the universal Church. May their contribution never cease to enrich the Church, the Continent of Europe and the whole world. May it never fail in Europe and in the world of today.  Amen