Reflection on St Anthony the Great 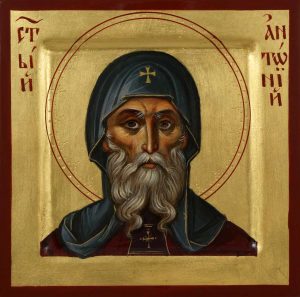 Someone approached Jesus and said, “Teacher, what good must I do to gain eternal life?”
Jesus answered him, “Why do you ask me about the good? There is only One who is good. If you wish to enter into life, keep the commandments.”
He asked him, “Which ones?”
And Jesus replied, “You shall not kill; you shall not commit adultery; you shall not steal; you shall not bear false witness; honour your father and your mother; and you shall love your neighbour as yourself.”
The young man said to him, “All of these I have observed. What do I still lack?”
Jesus said to him, “If you wish to be perfect, go, sell what you have and give to the poor, and you will have treasure in heaven. Then come, follow me.”
When the young man heard this statement, he went away sad, for he had many possessions.
Then Jesus said to his disciples, “Amen, I say to you, it will be hard for one who is rich to enter the Kingdom of heaven.
Again I say to you, it is easier for a camel to pass through the eye of a needle than for one who is rich to enter the Kingdom of God.”
When the disciples heard this, they were greatly astonished and said, “Who then can be saved?”
Jesus looked at them and said, “For men this is impossible, but for God all things are possible.”

St Anthony of Egypt – St Anthony the Great – the third-fourth-century hermit whom ancient tradition calls ‘the Father of the Monks’, is known to us today from the biography written shortly after Anthony’s death (356) by Saint Athanasius, patriarch of Alexandria. The origins of monasticism in Egypt have been debated by many scholars especially over the last two centuries, Anthony is normally considered the founder of the monastic movement. Monasticism has been of great importance to the Church stimulating a deep Christian culture enthused with asceticism, a devotion to scripture, a powerful desire for learning as a mission at the heart of a monastic ecclesia, prayer and liturgy and an upholding of the significance and dignity of manual labour through the necessity to provide for the monk, the community, and the monastery.

It is recorded that after experiencing the death of his parents when he was some twenty years old, and being mindful of the words of Jesus on renunciation (Mt. 19:21), Anthony gave away his goods and lived as a hermit outside the village. However, having a desire for deeper solitude, he moved to a mountainous region where he lived as a recluse for about ten years, heroically enduring, according to his biographer Athansius, the most violent assaults of the demons. In time, others gathered close to Anthony, thus forming the first monastic community, but then, in desiring a greater solitude for himself and his followers, he penetrated into the Eastern Desert and established himself in a hermitage situated about 20 miles from the Red Sea at the foot of Mount Qulzum, near the place where the monastery of Saint Anthony stands today.

St Anthony continues to inspire those who seek to live by the monastic ideal. Matta el-Meskin/Matthew the Poor (1919-2006), described as the ‘Contemporary Desert Father’ in L’Osservatore Romano, has been one of the most influential of contemporary figures to frame the spirit of the desert across a wide range of Christian monastics and thinkers – the Cistercian-Trappist Thomas Merton, the Russian Orthodox Seraphim Rose of Alaska, the Protestant Roger Schultz of Taize and the English Benedictine Bede Griffith OSB Cam. Matta el-Meskin held a radical focus on personal faith and monastic enclosure.  He writes in his Saint Anthony: A biblical Ascetic: “Monasticism is the final phase of testifying to the fervent and blazing Christian faith, which rested in the Church by the work of the Holy Spirit. It is a unique kind of faith, or a certain degree of perfection, but a living testimony to the Christian belief, which brings back to mind the early reaction to faith when the Holy Spirit descended on the Day of Pentecost. The core of this reaction was when every person left behind all their possessions, family, and home and joined the apostles – as per the Lord’s commandment anyway!  Monasticism also represents, or brings back to mind, the response of believers to martyrdom, when witnessing to Christ necessitated bearing the cross and being executed. Thus monasticism is a genuine depiction of the early church’s belief and way of life. It is a true model of Christianity exactly in accordance with the teachings of the Bible: not a later development, but an accurate model of genuine Christian Living! Therefore, when we speak of monasticism, we speak of genuine Christian life, and when we speak of genuine Christianity, we speak of monasticism as a living and contemporary model of life”.

Matta el-Meskin discerns twelve principles of asceticism in the life of Saint Anthony:

Matthew the Poor’s reflection on the monastic life and spirituality is an offering of this ideal to our times today. The writer in Sobornost (2006) speaks this of Matthew the Poor, ‘In the quiet sea of the sand of the Scete, You sleep like its eternal rocks, The rocks are silent. Your lips no longer speak; Your death now speaks louder’.

On his feast day, St Anthony, “the Father of the Monks”, speaks to us today from his Desert drawing each believer and seeker into an embrace of a lived ascetic ideal which is forever pointing the way.

Prayers
From the Byzantine Tradition

Troparion
By emulating the ways of Elias the zealot, and following the straight paths of the Baptist, O Father Anthony, you made the desert a city, and upheld the world by your prayers. Therefore, entreat Christ God that our souls be saved.

Kontakion
You rejected the tumults of this life and lived a life of stillness, emulating the Baptist in every way, most righteous one. Therefore, we honour you with him, Father Anthony, the foundation of the Fathers.

From the Sedro of the “Quorbono” of the Maronite Rite
“O Christ our God, You taught us the way of true perfection and happiness. You encouraged those who follow You to sell what they have, give to the poor and to take up the cross. When blessed Anthony heard these words, his heart was inflamed with love for You. He left the world, renounced nation and family and accepted Your easy yoke. He entered monastic life with his companions: mortification, abstinence and self-denial. By turning away from everything, he turned to You alone; and by dying to himself, he lived for You alone. For this reason we honour his memory and say: Blessed are you, holy Anthony, father of monks and example of religious life; tall cedar on the slope of Mount Lebanon, you have become a prophetic word echoing in the world .Blessed are you, holy Anthony; you became a lampstand for the Light of the world. By that Light, many have been guided in the way of religious life Blessed are you, Holy Anthony, morning star in a world of darkness. Your light made evil fear and caused sin to drawback in fright. How glorious is your Lord, now and forever.”
Amen.

Collect from the Roman Missal
O God, who brought the Abbot Saint Anthony to serve you by a wondrous way of life in the desert, grant, through his intercession, that, denying ourselves, we may always love you above all things. Through our Lord Jesus Christ, your Son, who lives and reigns with you in the unity of the Holy Spirit, God, for ever and ever.

Most of what we know about Anthony of Egypt comes from The Life of Anthony written c 360 by St Athanasius.

Anthony is often called the “Father of Monks,” because his long life and example contributed to the growth and formation of monasticism.  He was born around 250 and died around 356, living at the time of great Christian persecution and the period of the Arian controversy.

Though he was a hermit in the desert, his spiritual insight and advice was much sought after. Athanasius, in his Life of St Anthony, sums up his importance: ‘he consoled many that were sorrowful, and set those at variance at one, exhorting all to prefer the love of Christ before all that is in the world. And while he exhorted and advised them to remember the good things to come, and the loving-kindness of God towards us, “Who spared not His own Son, but delivered Him up for us all” (Rom. 8:32), Anthony persuaded many to embrace the solitary life. And thus it happened in the end that cells arose even in the mountains, and that the desert was colonized by monks, who came forth from their own people, and enrolled themselves for the citizenship in the heavens’.