...hermit of the Lebanese mountain is inscribed in the number of the blessed, a new eminent member of monastic sanctity is enriching, by his example and his intercession, the entire Christian people. May he make us understand, in a world largely fascinated by wealth and comfort, the paramount value of poverty, penance and asceticism, to liberate the soul in its ascent to God… 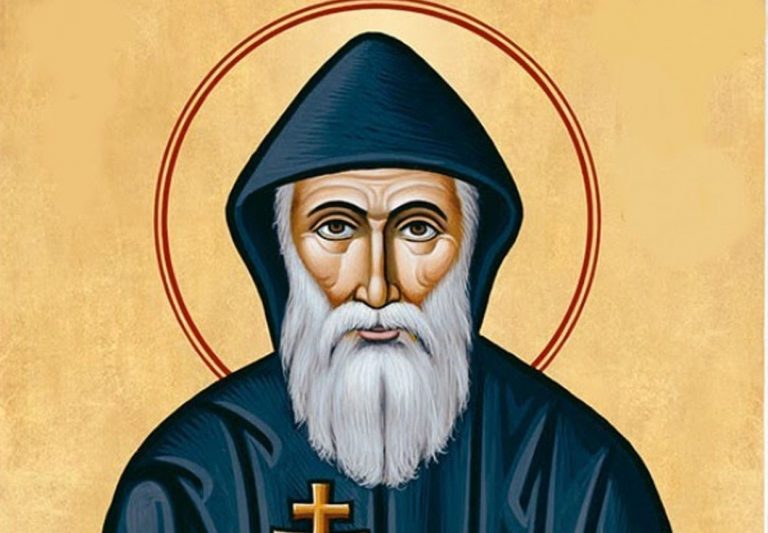 Born as Youssef Antoun Makhlouf on May 8, 1828, St Charbel was raised as the youngest of 5 children in the Bekaa Kafira, a small village in the Lebanese mountains.

His father died when Youssef was just three years old. His mother remarried a deacon named Ibrahim in order to ensure her children’s keep and education.

As a young boy, Youssef studied at the local parish school and cared for families’ cows. He spent a great deal of time in the pastures and fields near his family home, tending the sheep and the spending time in prayer.

He left home in 1851, taking his monastic vows two years later in a closed that even excluded his family. Here he was named “Brother Charbel”.

He subsequently studied for the priesthood and was ordained, returning to the Monastery of St. Maron for 19 years, where he showed great devotion to prayer and the contemplative life. However, he did not remain there long. Brother Charbel, who was poised to follow in the footsteps of two of his uncles, was granted permission to live as a solitary monk in the Hermitage of Saints Peter and Paul.

Many miracles are attributed to St Charbel. An early miracle took place when prayed for the ill son of Prince Rachid Beik Al-Khoury, who was suffering from typhus. The doctors were certain of his pending death. Fr Charbel blessed the boy with Holy Water and gave him his last rite. The boy quickly recovered and went on to become one of the most famous physicians in Lebanon.

A second miracle took place in the village of Annaya where locusts ravaged the harvest in local farmers fields. It was a terrible plague that could wipe out the whole crop. Father Charbel, as he was then, prayed over the fields and blessed them with holy water. The locusts dispersed and the harvest was saved.

St Charbel was canonised in 1977 by Pope Paul VI, who had earlier hailed the Lebanese Maronite saint as an “admirable flower of sanctity blooming on the stem of the ancient monastic traditions of the East.”

FACE relies on donations to deliver it’s mission of helping Eastern Christians to remain in their homelands – the Biblical lands – where Christianity was born and first spread.

Together with the local Christian communities, we aim to bring lasting change to those regions through education, healthcare, pastoral support and community projects.

We strive to preserve the heritage of the Eastern Churches so that Eastern Christians remain a living testament to the roots, legitimacy and beneficence of the Christian presence in Arabic society