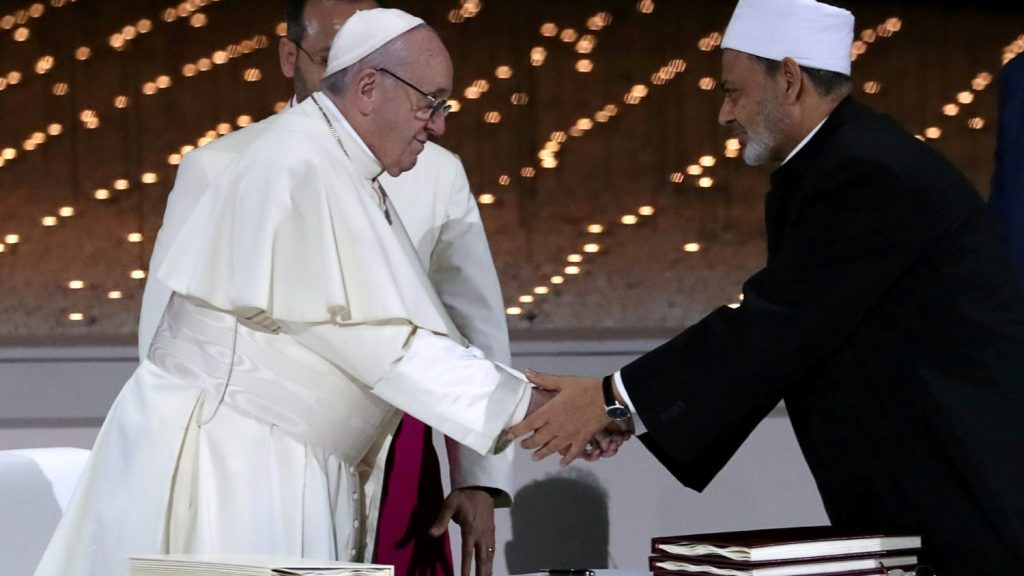 Pope Francis on Human Fraternity: We are all born of the same Father.

Pope Francis highlights the theme of fraternity in a video message for the first International Day of Human Fraternity celebrated on Thursday. He calls for a world of mutual respect, stressing that we can either choose to be brothers and sisters or we lose everything.

Pope Francis marked the first-ever International Day of Human Fraternity on Thursday, in a virtual event hosted by Sheikh Mohammed bin Zayed in Abu Dhabi, with the participation of the Grand Imam of Al-Azhar, Ahmad Al-Tayyeb, UN Secretary-General António Guterres, and other personalities.

During the occasion, the Holy Father, in a video message, expressed his gratitude to those who had contributed to the promotion of fraternity in spite of the challenges.

The Pope offered special recognition to the Grand Imam, Ahmad Al-Tayyeb, for his testimony and collaboration in writing the document presented two years ago. Pope Francis also expressed his gratitude to the Crown Prince of the Emirate of Abu Dhabi, Sheikh Mohammed bin Zayed for his belief in the project, and Judge Abdel Salam for his active participation in its advancement.

“Thank you all for committing to fraternity,” Pope Francis said, “because today fraternity is the new frontier of humanity. Either we are brothers, or we destroy each other.”

Not a time for indifference

Pope Francis went on to insist that “today, there is no time for indifference” and “we cannot wash our hands” off the present situation with distance, disregard and contempt. He affirmed that we are either brothers and sisters, “or everything falls apart,” adding that this is the frontier on which we have to build – “the challenge of our century and the challenge of our times.”

Brothers and sisters despite differences

“We do not need to be at war to be enemies, disregarding each other is enough,” the Pope said, adding that it is time to stop the attitude of looking the other way and ignoring others as if they did not exist.

A part of the celebrations for the International Day of Human Fraternity is the presentation of the 2021 Zayed Award for Human Fraternity to UN Secretary-General Antonio Guterres, and Moroccan-French activist, Latifa Ibn Ziaten.

Addressing the UN Secretary-General, Pope Francis congratulated him for the award and expressed gratitude for his efforts towards promoting peace “that will only be achieved with a fraternal heart.”

Directing his attention towards the second 2021 Zayed Award honoree, Latifa Ibn Ziaten, the Pope acknowledged her inspiring testimony of painfully losing a child yet channeling her pain towards fostering love and fraternity.

“Yes, sister, your words are not hearsay or a conventional ‘we are all brothers’: they are a conviction. A conviction embodied in pain, in your wounds,” the Pope said.