Nature: The Ethiopian  Catholic Church is an Eastern Catholic church in full communion with the Bishop of Rome.

Origin: Christianity emerged in Ethiopia in the 1st century AD, when St Mark the Evangelist, St Matthias the Apostle and St Philip the Evangelist were preaching the Gospels in the region.

Language:  Ge’ez (a Semitic language that fell out of daily use several centuries ago)

Title: Archbishop of Addis Ababa of the Ethiopians

Catholic missionaries arrived in Ethiopia in the 14th century, and Pope Eugenius IV sent a letter to the Ethiopian Emperor on August 28, 1439, inviting him to unity with the Catholic Church, but such efforts were unsuccessful. In the 16th century, Islamic attacks, culminating in 1531, threatened the very existence of Christian Ethiopia. The Emperor appealed for assistance to the Portuguese, who sent sufficient military support from Goa to defeat the Islamic armies definitively in 1543.

The Portuguese in Ethiopia were accompanied by Jesuit missionaries, who began an effort to bring the Ethiopian Orthodox Church into union with the Catholic Church. They focused their activity on the political elite of the country including the Emperor himself. Largely through the efforts of Fr. Peter Paez, Emperor Susenyos converted and declared Catholicism the state religion in 1622. The following year Pope Gregory XV appointed another Portuguese Jesuit, Affonso Mendez, as Patriarch of the Ethiopian Church. A formal union was declared when Mendez arrived in the country in 1626. But this union was to last only ten years. Mendez imposed a series of latinizations on the Ethiopian liturgy, customs, and discipline, which Susenyos then tried to enforce with cruelty and bloodshed. This led to a violent public reaction. Susenyos died in 1632. In 1636 his successor expelled Mendez, dissolved the union, and either expelled or executed the Catholic missionaries. The country was closed to Catholic missionary activity for the next 200 years.

In 1839 limited activity was resumed by the Lazarists and Capuchins, but public hostility was still very strong. It was only with the accession of King Menelik II to the throne in 1889 that Catholic missionaries could again work freely in the country. Catholic missionary activity expanded in Ethiopia during the Italian occupation from 1935 to 1941, as it had earlier in Eritrea which had been under Italian control since 1889.

In 1961 a metropolitan see was established at Addis Ababa with suffragan dioceses in Asmara (Eritrea) and Adigrat. After Eritrea achieved independence on May 24, 1993, about half the faithful found themselves in that new country. In 1995 Pope John Paul II created two new dioceses in Eritrea at Keren and Barentu, and in 2003 he established the diocese of Emdeber, Ethiopia. On January 19, 2015, Pope Francis created a separate metropolitan church for Eritrea and a new eparchy in Ethiopia at Bahir Dar-Dessie. Thus the present Ethiopian metropolitan church is composed of the metropolitanate in Addis Ababa and suffragan eparchies in Adigrat, Emdeber, and Bahir Dar-Dessie.

Until 2015, the Catholic bishops of Ethiopia and Eritrea composed a single episcopal conference with headquarters in Addis Ababa. In both countries all the jurisdictions are geographical, and include worshipping communities of both the Latin and Ethiopian traditions. The four dioceses in central and northern Ethiopia generally use the Ethiopian (Ge’ez) rite, and fall under the jurisdiction of the Oriental Congregation. In southern Ethiopia there are five Apostolic Vicariates and two Apostolic Prefectures mostly of the Latin rite with about 500,000 faithful under the jurisdiction of the Congregation for the Evangelization of Peoples. The membership figure below is the sum of the Ethiopian dioceses that depend on the Oriental Congregation. In 2014 there were 127 parishes in those dioceses served by 121 secular priests and 179 priests who belonged to religious orders. There were also 440 women religious and 84 seminarians.

In Ethiopia all the major seminarians attend the Capuchin Franciscan Institute of Philosophy and Theology in Addis Ababa, except those from the diocese of Adigrat, which has its own major seminary. In 1919 Pope Benedict XV founded the Pontifical Ethiopian College within the Vatican walls and designated St. Stephen’s Church directly behind St. Peter’s Basilica for the use of the college. 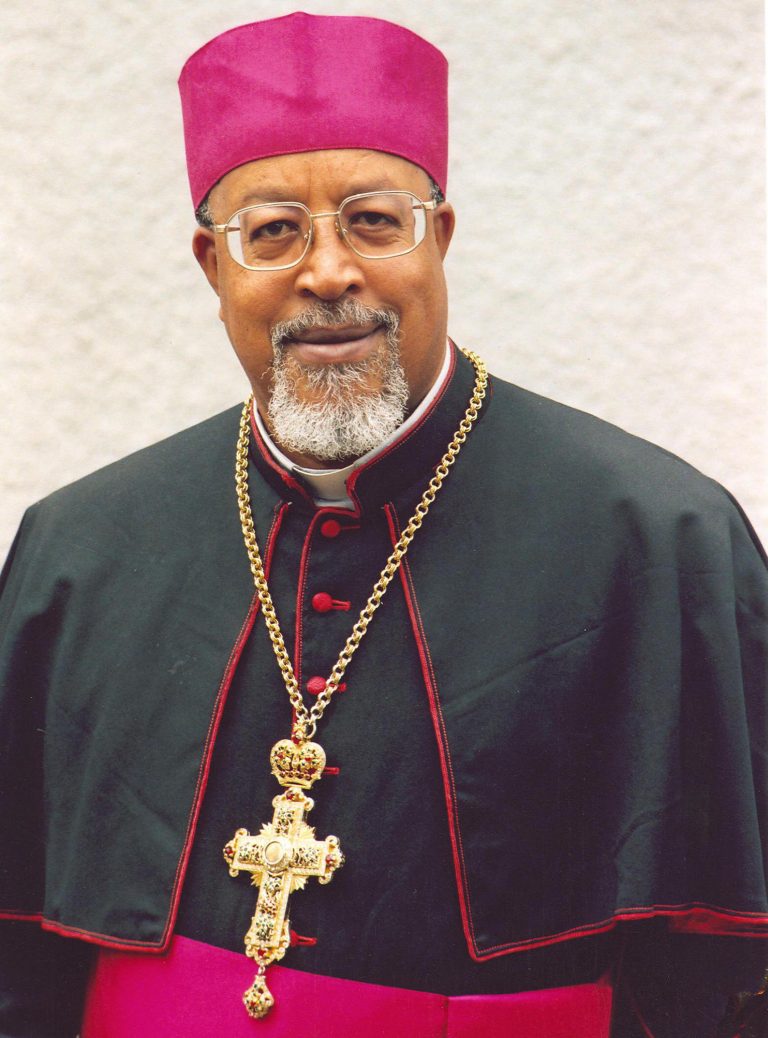 President of Council of the Ethiopian Church

President of the Ethiopian and Eritrean Episcopal Conference

Cardinal Berhaneyesus Demerew, C.M., Metropolitan Archbishop of Addis Abeba (Ethiopia), was born in Cheleleqa, Ethiopia on 14 July 1948.  In 1963 he entered the Lazarist Minor Seminary and then studied philosophy at the Makanissa Major Seminary.

In 1970 he moved to London, where he studied at the Missionary Institute and earned a bachelor of divinity at King’s College.  He was ordained a priest on 4 July 1976 in Ethiopia, where he was imprisoned by the Communists from 1979-1980.

After his release, he moved to Rome, where he served as a delegate to the General Assembly of the Congregation of the Mission and also earned a master degree in socio-economic development at the Pontifical Gregorian University.  He returned to Ethiopia and in 1985 began serving as director of the Lazarist Novitiate, in addition to being a parish priest and lecturer at the St. Francis Institute of Philosophy and Theology.  With the establishment of the Apostolic Prefecture of Jimma-Bonga, Ethiopia on 10 June 1994, he became the first apostolic prefect.

On 25 January 1998 he was ordained a bishop subsequent to his appointment as titutlar Bishop of Bita and as Auxiliary of the archdiocese of Addis Ababa.  On 7 July 1999 he was appointed Archbishop of Addis Ababa.

Created and proclaimed Cardinal by Pope Francis in the consistory of 15 February 2015, of the Title of San Romano Martire.

Member of Congregation for the Oriental Churches

Ethiopian Catholic Church in the UK