Nature: The Eritrean  Catholic Church is an Eastern Catholic church in full communion with the Bishop of Rome.

Origin: Christianity emerged in Eritrea in the 1st century AD, when St Mark the Evangelist, St Matthias the Apostle and St Philip the Evangelist were preaching the Gospels in the region.

Language:  Ge’ez (a Semitic language that fell out of daily use several centuries ago)

Title: Archbishop of Asmara of the Eritreans

In the wake of the disastrous missionary efforts of the Portuguese in Ethiopia in the 17th century, the imperial government prohibited all Catholic missionary activity in the country, which included Eritrea, for the next 200 years. The first successful resumption of such activity began in the mid-19th century when the Holy See established an Apostolic Prefecture for Abyssinia. Its first bishop was the Italian Lazarist St. Justin de Jacobis (1800-1860), who arrived in 1839. Much of his ministry took place in Eritrea, and he died at the Eritrean town of Hebo in 1860.

Eritrea became an Italian colony in 1890, and with the support of the new colonial government Catholic missionary activity intensified and met with a measure of success. In 1894 a separate Apostolic Prefecture for Eritrea was established. In the same year the Italian governor invited the Capuchin order to direct the evangelization of the colony and supervise the newly established educational system. In 1911 the Apostolic Prefecture became an Apostolic Vicariate, and in 1930 an Ordinariate. In the same year an Ethiopian College was founded within the walls of the Vatican; it also welcomed students from Eritrea.

In 1951 the Ordinariate of Eritrea became an Apostolic Exarchate and the following year Eritrea entered into a federal union with Ethiopia. In 1961, when the Holy See reorganized the hierarchies of Ethiopia and Eritrea, Asmara was established as a single eparchy covering the whole of Eritrea. After Eritrea became an independent nation in 1993, the Catholic bishops of Ethiopia and Eritrea continued to form a single Bishops’ Conference. In 1995 Pope John Paul II erected two new Eritrean eparchies in Barentu and Keren. In 2012 another eparchy was established at Segheneity.

In September 2004 the U.S. Secretary of State designated Eritrea as a “Country of Particular Concern” under the International Religious Freedom Act. The 2013 State Department’s report on religious freedom in Eritrea stated that the government’s performance on this issue was poor. The Catholic Church is one of four officially recognized and registered religious groups; others are vigorously suppressed.

In June 2014 the Catholic Bishops of Eritrea issued a pastoral letter entitled “Where Is Your Brother?” in which they decried the “desolate” conditions in the country, including the absence of freedom of speech, poor educational standards, lack of rule of law, economic hardship and the disastrous situation of young people who are emigrating in large numbers in search of a better life. They observed that a disproportionate number of Eritreans have been among the hundreds of immigrants who have drowned in the Mediterranean Sea while trying to reach Europe.

Currently, in Eritrea, there is a total of 107 parishes, 103 diocesan priests, 395 religious priests, 777 men religious, 719 women religious and 254 seminarians. The church maintains seminaries in Asmara and Keren.

On January 19, 2015, Pope Francis reorganized the Catholic Church in Eritrea, detaching it from the Catholic Church in Ethiopia and raising it to the rank of metropolitan church sui iuris. The eparchy of Asmara became the metropolitan archeparchy with the four suffragan dioceses in Keren, Berentu and Segheneity. All these eparchies are of the Ethiopian or Ge’ez rite; the small remaining communities of the Latin tradition fall under their jurisdiction 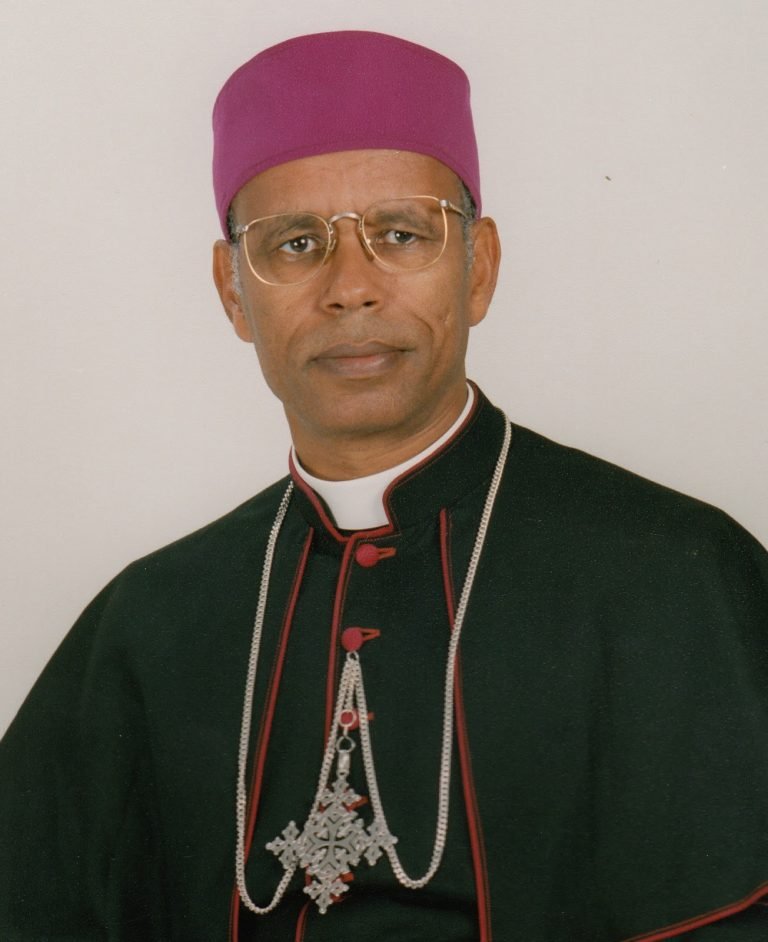 Archbishop of Asmara and Head of the Eritrean Catholic Church

The Most Reverend Menghesteab Tesfamariam, M.C.C.I., (born 24 December 1948 in Berakit) is, as metropolitan archbishop of the Archeparchy of Asmara, the head of the Eritrean Catholic Church.

Ordained as a priest of the Comboni Missionaries of the Heart of Jesus[1] on 18 February 1979, he was appointed as Bishop of Asmara on 25 June 2001, and ordained on 16 September.

In January 2015, Pope Francis established the Eritrean Catholic Church as an autonomous sui iuris Eastern Catholic Church, thus separating it from the Ethiopian Catholic Church. At the same time he elevated the Eparchy of Asmara to the dignity of an Archeparchy and named Menghesteab Tesfamariam as the head of the new church.

There are four territorial jurisdictions in the country, known as eparchies

Eritrean Catholic Church in the UK