Nature: The Chaldean Church is an Eastern Catholic Church in full communion with the Bishop of Rome

Origin: The Early Church in Babylon was founded by St Thomas the Apostle and his disciples St Addai and St Mari who evangelised the exiled Jews

Beginnings: Autonomy as the Church of the East in AD 410; branched off as Chaldean Church in AD 1553

Title: Patriarch of Babylon of the Chaldeans

History of the Chaldean Catholic Church

As early as the 13th century, Catholic missionaries – primarily Dominicans and Franciscans – had been active among the faithful of the  Church of the East. This resulted in a series of individual conversions of bishops and brief unions, but no permanent community was formed.

In the mid-15th century a tradition of hereditary patriarchal succession (passing from uncle to nephew) took effect in the Church of the East. As a result, one family dominated the church, and untrained minors were being elected to the patriarchal throne.

When such a patriarch was elected in 1552, a group of  bishops refused to accept him and decided to seek union with Rome. They elected the reluctant abbot of a monastery, Yuhannan Sulaka, as their own patriarch and sent him to Rome to arrange a union with the Catholic Church. In early 1553 Pope Julius III proclaimed him Patriarch Simon VIII “of the Chaldeans” and ordained him a bishop in St. Peter’s Basilica on April 9, 1553.

The new Patriarch returned to his homeland in late 1553 and began to initiate a series of reforms. But opposition, led by the rival Assyrian Patriarch, was strong. Simon was soon captured by the pasha of Amadya, tortured and executed in January 1555. Eventually Sulaka’s group returned to the  Church of the East, but for over 200 years, there was much turmoil and changing of sides as the pro- and anti-Catholic parties struggled with one another. The situation finally stabilized only on July 5, 1830, when Pope Pius VIII confirmed Metropolitan John Hormizdas as head of all Chaldean Catholics, with the title of Patriarch of Babylon of the Chaldeans, with his see in Mosul.

The Chaldean Catholics suffered heavily from massacres during World War I (1918) when four bishops, many priests, and about 70,000 faithful died.

The location of the Patriarchate shifted back and forth among several places over the centuries, but gained a measure of stability after it was set up at Mosul in 1830. In 1950 it moved to its present location in Baghdad after substantial migration of Chaldean Catholics from northern Iraq to the capital city.

The Chaldean Catholic Church’s relationship with the Assyrian Church of the East improved dramatically after the signing of a joint christological agreement between the Pope and the Assyrian Patriarch in Rome in November 1994. In August 1997 the Holy Synods of the two churches formally instituted a commission for dialogue to discuss pastoral cooperation at all levels.

Chaldean candidates for the priesthood study at St. Peter’s Patriarchal Seminary in Baghdad. In 1991 the Chaldean Holy Synod established Babel College for Philosophy and Theology next to St. Peter’s Seminary. It aims to provide a higher scientific education for priests, monks, nuns and interested lay people, and is affiliated with the Pontifical Urban University in Rome. Today the largest concentration of these Catholics remains in Baghdad. There are ten Chaldean dioceses in Iraq, four in Iran, and four others in the Middle East.

The Chaldean liturgy can be traced back to the Syriac Christian culture of Edessa, and attained its present basic structure in the 7th century. The liturgical language is Syriac, and a number of Latin customs have been adopted.

The invasion of Iraq by the US-led coalition in 2003 and its consequences, resulting in political and economic instability and a breakdown in law and order, as well as the displacement of various religious and ethnic groups, has dealt a heavy blow to the Chaldean Church and the wider Christian community in Iraq over the past two decades. In 2007 Patriarch Emmanuel III Delly said that a large number of Chaldeans had left Iraq because of various forms of persecution. He spoke of internal persecution by radical Islamists who were chasing Christians out of their homes and lands, and a lack of awareness,  on the part of the occupying forces, of the Christian contribution to the stability of Iraqi society. Father Ragheed Aziz Ganni, the pastor of the Chaldean Church of the Holy Spirit in Mosul, was killed on 3 June 2007 in Mosul, alongside the subdeacons Basman Yousef Daud, Wahid Hanna Isho, and Gassan Isam Bidawed, after he celebrated Mass. Ganni has since been declared a Servant of God. Chaldean Archbishop Paulos Faraj Rahho and three companions were abducted on 29 February 2008, in Mosul, and murdered a few days later. In consequence of the long, drawn-out period of troubles, the Christian population of Iraq has shrunk from approximately 1.5 million in 2003 to just over 200,000 in 2021, of which around 80% are Chaldean.

Fleeing their troubled homeland, many Chaldeans have sought refuge and safe haven in the Western world, principally in Europe, USA, Canada and Australia.  There are two Chaldean Catholic dioceses in the United States. The Eparchy of St. Thomas the Apostle of the Chaldeans was established in 1982, and is under the leadership of Bishop Frank Kalabot, from his see in Southfield, Michigan. It has five parishes in the Detroit area and two in Chicago. The Eparchy of St. Peter the Apostle of the Chaldeans in San Diego, established in 2002, has six parishes in California and one in Arizona, and is headed by Bishop Emanuel Hana Shaleta, from his see in El Cajon, California. In 2006, a new eparchy of Saint Thomas the Apostle of Sydney was established for Chaldeans in Australia and New Zealand, which currently is led by Bishop Amel Shamon Nona.  There are eight worshipping communities for approximately 35,000 Chaldeans in the two countries. There is a Chaldean chaplaincy in the UK, led by Father Andrawis Toma, which is centred at the Holy Family Catholic Church,  West Acton in London.  In other areas of the world, Chaldeans are under the spiritual supervision of the local Latin ordinaries 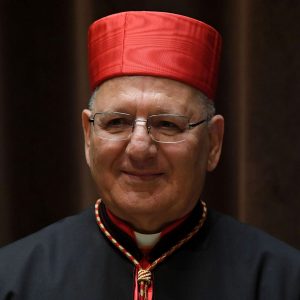 Patriarch of Babylon of the Chaldeans

Patriarch of the Chaldean Catholic Church

Born in Zakho (Iraq) in 1948, Louis Raphaël Sako has been the Patriarch of Babylon of the Chaldeans and head of the Chaldean Catholic Church since 2013.

After studies at Saint John’s Seminary in Mosul, he was ordained priest in 1974 and carried out his pastoral service at the Cathedral of Mosul  until 1979. He was then sent to Rome where he attended the Pontifical Oriental Institute, obtaining a doctorate in Eastern patrology. He subsequently obtained a doctorate in history from the Sorbonne in Paris.

From 1997 to 2002 he held the office of rector of the Patriarchal Seminary in Baghdad. He was made archbishop of Kirkuk in 2003 and then elected Patriarch of Babylon of the Chaldeans in 2013   during the Synod convened in Rome by Pope   Benedict XVI after the resignation of the former Patriarch, His Beatitude Cardinal Delly.

His Beatitude Louis Raphaël Sako was raised to the rank of cardinal by Pope Francis in the Consistory of 2018. In the same year, Pope Francis also appointed him the President Delegate of the XV Ordinary General Assembly of the Synod of Bishops on Young People, the Faith and Vocational Discernment. He is a member of the Congregation for the Oriental Churches.

Cardinal Sako has published books on the Church  Fathers, a History of the Chaldean Church, and numerous articles. In addition to Arabic and Chaldean, he speaks German, French, English and Italian.

Chaldean Catholic Church in the UK

In the Middle East 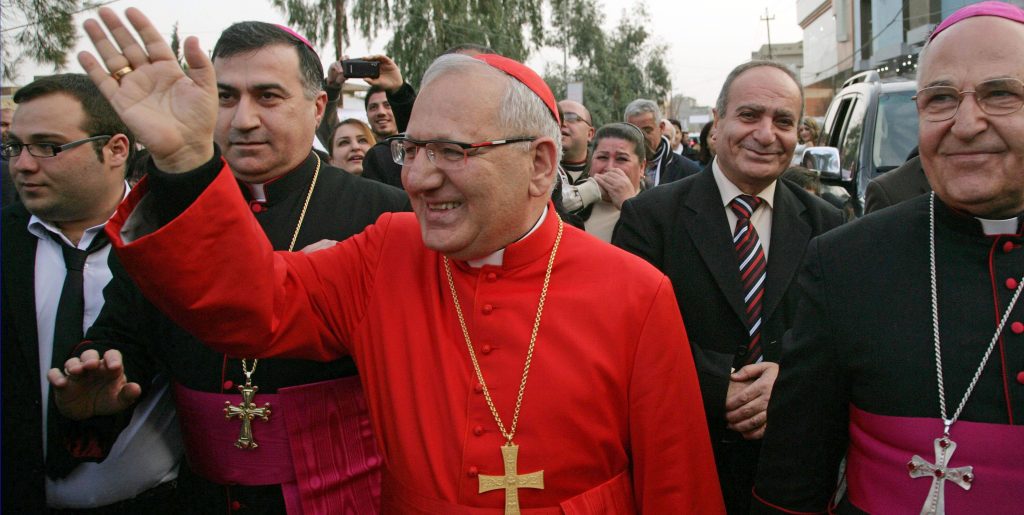