Origin: According to tradition, Christianity came to Armenia in the 1st century through the missions of St Bartholomew Apostle and St Thaddeus of Edessa, disciple of Jesus.

Beginnings:  Armenia became the first country to adopt Christianity as a state religion around AD 300, when St. Gregory the Illuminator converted the Arsacid king Tiridates III.  After the 6th Ecumenical Council of 681, some Armenian bishops and congregations branched away from the Armenian Apostolic Church, to restore communion with the Chalcedonian Churches, thus forming the roots of the Church which would later, in the 2nd millenium, find union with Rome and become the Armenian Catholic Church.

Title: Catholicos-Patriarch of Cilicia of the Armenians

A decree of reunion with the Armenian Apostolic Church, Exultate Deo, was published at the Council of Florence on November 22, 1439. Although it had no immediate results, the document provided the doctrinal basis for the establishment of an Armenian Catholic church much later.

Catholic missionary activity among the Armenians had begun early, led initially by the Friars of Union, a now-defunct Armenian community related to the Dominicans, founded in 1320. With the passage of time, scattered but growing Armenian Catholic communities began to ask for a proper ecclesial structure and their own patriarch. In 1742 Pope Benedict XIV confirmed a former Armenian Apostolic bishop, Abraham Ardzivian (1679-1749), as Patriarch of Cilicia of the Armenians, based in Lebanon, and with religious authority over the Armenian Catholics in the southern provinces of the Ottoman Empire. In the north, they continued to be under the spiritual care of the Latin Vicar Apostolic in Constantinople. The new patriarch took the name Abraham Pierre I, and all his successors have likewise taken the name Pierre in their ecclesiastical title.

The Ottoman millet system, which provided for the administrative autonomy of minorities under the direction of their religious leaders, had placed all Armenian Catholics under the civil jurisdiction of the Armenian Apostolic Patriarch in Constantinople. This resulted in serious difficulties and even persecution of Armenian Catholics until 1829 when, under French pressure, the Ottoman government gave them the right to be organized civilly as a separate millet, with an Archbishop of their own in Constantinople. In 1846 he was vested with civil authority as well. The anomaly of having an Archbishop with both civil and religious authority in the Ottoman capital and an exclusively spiritual Patriarch in Lebanon was resolved in 1867 when Pope Pius IX united the two sees and moved the patriarchal residence to Constantinople.

The vicious persecution of Armenians in Turkey at the end of World War I decimated the Armenian Catholic community in that country: seven bishops, 130 priests, 47 nuns and as many as 100,000 faithful died. Since the community in Turkey had been drastically reduced in size, an Armenian Catholic synod in Rome in 1928 decided to transfer the Patriarchate back to Lebanon (Beirut), and to make Constantinople (now Istanbul) an Archdiocese.

The only Armenian Catholic monastic order is the Mechitarist Fathers, founded in Constantinople by the monk Mechitar in 1701. The growing community established itself on the island of San Lazzaro, near Venice, in 1717. In 1773 a group of the monks set up a separate community in Trieste which transferred to Vienna in 1811. These two communities long served the entire Armenian nation through their scholarship and publishing activity both in Europe and the Middle East. In 2000 the two groups re-united into a single congregation based in Venice. It now has 27 members.

The Patriarchal Congregation of Bzommar, Lebanon, was founded in 1750, originally as a community of bishops and priests that included the Patriarch and his staff. Many of its members now serve as missionaries in various parts of the world.

There is also one female religious order, the Armenian Sisters of the Immaculate Conception. Founded in Constantinople in 1847, the community now has 25 foundations and 85 members. Its headquarters are in Rome.

There are now four major seminaries at the service of the Armenian Catholic Church: The Armenian Pontifical College founded in Rome in 1883; a seminary directed by the Mechitarist monks in Bikfaya, Lebanon; one at the Bzommar Patriarchal Congregation in Lebanon; and one for married candidates for the priesthood in Tbilisi, Georgia.

Today the largest concentrations of Armenian Catholics are in Beirut, Lebanon, and Aleppo, Syria. The church has seven dioceses in the Middle East: two in Syria and one each in Lebanon, Iraq, Iran, Egypt and Turkey.

The Eparchy of Our Lady of Nareg was established in 2005 for Armenian Catholics in the United States and Canada. Its 36,000 faithful and nine parishes are under the spiritual care of Bishop Mikael Mouradian (Armenian Catholic Eparchy, Saint Gregory the Illuminator Cathedral, 1510 East Mountain Street, Glendale, CA 91207; Tel. 1 818 243 8400; secretary@ourladyofnareg.org).

The Eparchy of Sainte-Croix-de-Paris, with its 35,000 faithful across 6 parishes in France, is one of the largest diaspora, and since 2013 has been led by Bishop Jean Teyrouz, Apostolic Visitor in Western Europe of the Armenians.

Armenian Catholics in Britain, Australia, and New Zealand are under the supervision of the local Latin bishops 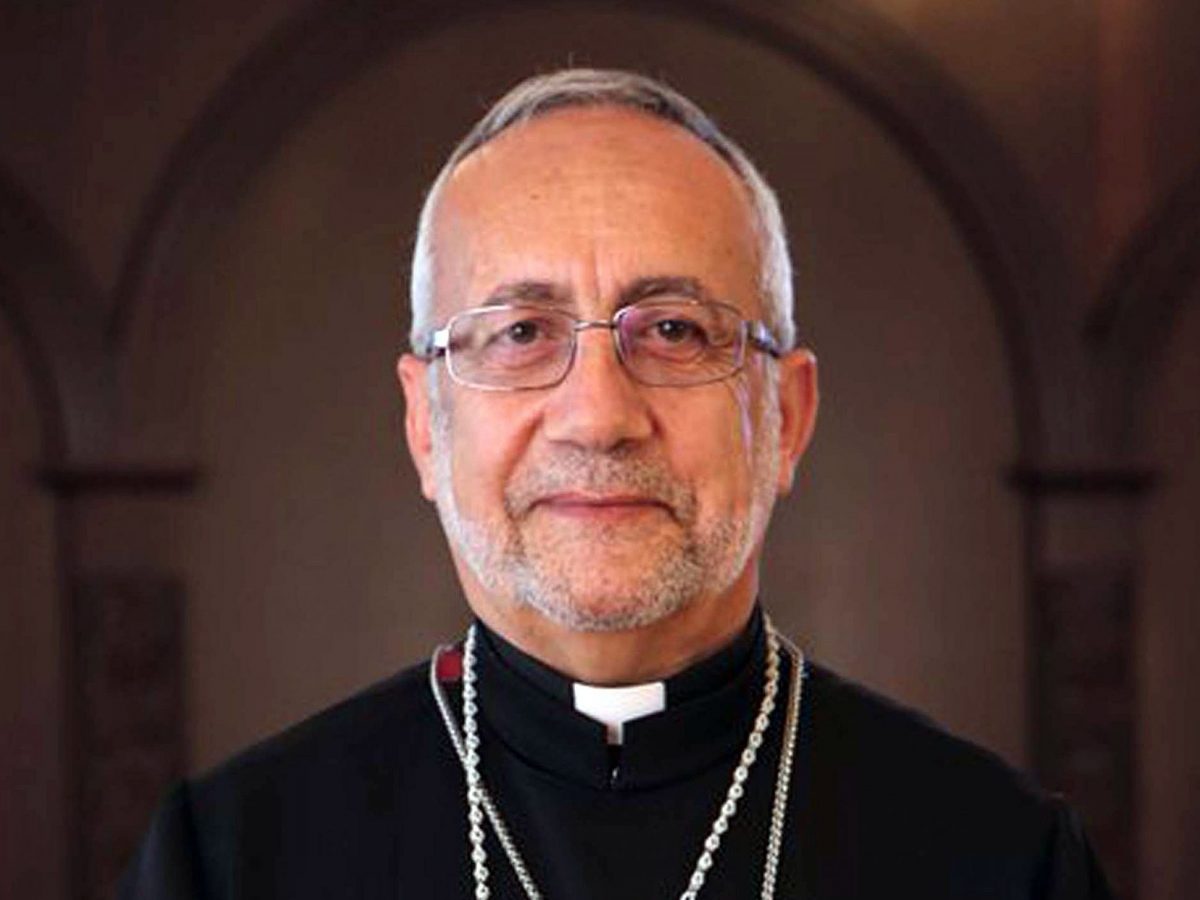 Catholicos-Patriarch of Cilicia of the Armenians

Head of the Armenian Catholic Church

Born on 24 November 1946 in Beirut, Raphaël François Minassian was educated at the Patriarchal Seminary of Bzommar and studied philosophy and theology at the Pontifical Gregorian University.

At the Salesian Pontifical University, he attended specialised in psycho-pedagogy. On 24 June 1973, he was ordained a priest as a member of the Patriarchal Clergy Institute in Bzommar.

From 1973 to 1982 he served as a parish priest of the Armenian Cathedral in Beirut, and later as secretary to Patriarch Hovannes Bedros XVIII Kasparian. From 1984 to 1989 he was in charge of the Holy Cross parish complex in Zalka, Beirut.

In 1989, he moved to the United States, where he served as pastor for Armenian Catholics in California, Arizona and Nevada until 2003.

Since 2004 he has directed Telepace Armenia, which he helped to found. In 2005, he was appointed Patriarchal Exarch of Jerusalem and Amman for the Armenians. Since June 2011 he has served as Ordinary for the Armenian Catholic Faithful of Eastern Europe.

Pope Francis appointed him to the titular See of Caesarea of Cappadocia for the Armenians with the title of Archbishop ad personam. From 24 to 26 June 2016, he hosted Pope Francis during his Apostolic Journey to Armenia.