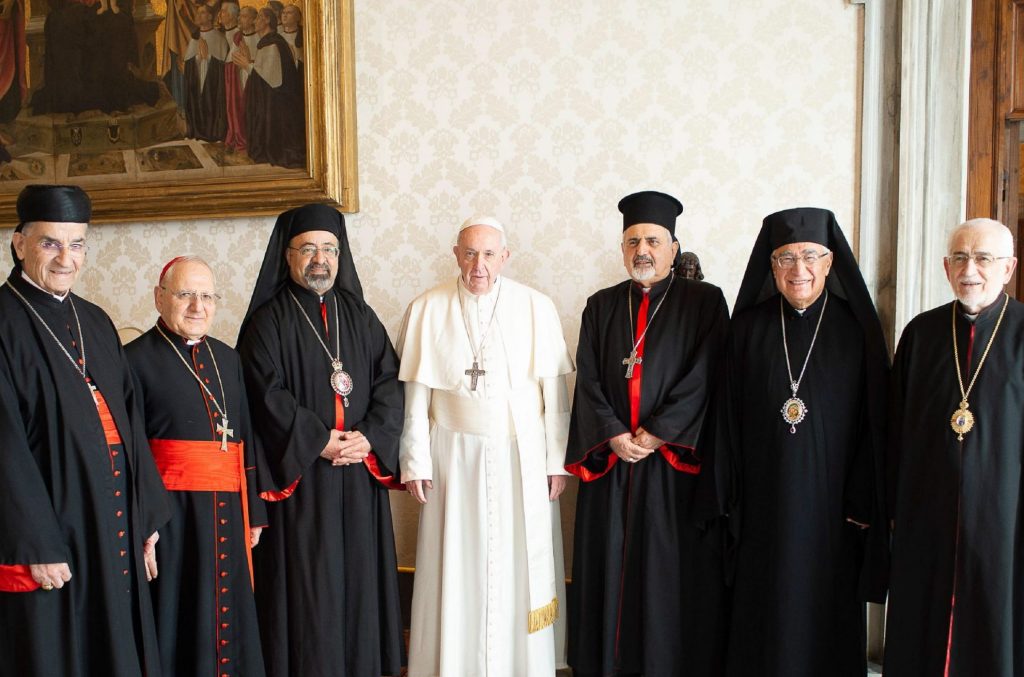 Day of Prayer for Eastern Christians

Fr Robin Gibbons writes: At the beginning of St John Paul II’s Apostolic letter, Orientale Lumen of May 2nd 1995, this phrase appears: ‘…we believe that the venerable and ancient tradition of the Eastern Churches is an integral part of the heritage of Christ’s Church, the first need for Catholics is to be familiar with that tradition, so as to be nourished by it and to encourage the process of unity in the best way possible for each.

This concept is not new, not at all inimical to any ecclesiological understanding of Church and Kingdom, but is perhaps too often overlooked in our contemporary preoccupations-and yet it is essential if the world is to hear and know the Risen Christ and the living history of his community found particularly in the land of Christ’s birth, ministry and resurrection where the mission of the Church begins and still continues.

Sunday May 9th 2021, is when we hold the Day of Prayer for Eastern Christians, the fact we have to determine a special day marked out in this manner is itself a stark reminder of the great work of reconciliation and healing that needs to take place across the Christian community, the first and Gospel Mass readings from the Roman (Latin) Rite of this Sunday (6th after Easter) places before us these profound insights. Firstly in the Book of Acts, Peter comes to a deep understanding of the nature of God:

‘Then Peter proceeded to speak and said, “In truth, I see that God shows no partiality. Rather, in every nation whoever fears him and acts uprightly is acceptable to him”‘ (Acts 10:26).

By extension this impartiality of God also refers to the communities that formed themselves into the various diverse communities as part of the Church of Christ, becoming known as the various ‘churches’ of East and West. Peter’s vision echoes John Paul II’s words about heritage and origin, Christians cannot divorce themselves from the venerable and ancient heritage of the one family of God- found in the diversity of peoples and ecclesial communities, which began in the Middle East.

The second quote is the command of Christ found in John’s Gospel:

“It was not you who chose me, but I who chose you and appointed you to go and bear fruit that will remain, so that whatever you ask the Father in my name he may give you. This I command you: love one another.” (Jn 15:16,17)

Two things strike us: firstly that our disagreements and comments about which church is right, what customs are correct, fade into insignificance before the clear reminder that the Church of Christ is not a human foundation, nor are Christian communities societies of common purpose, we are called, we have a vocation given us by Christ as is made clear in the Rite of our Christian Initiation, secondly the command to follow Christ as missionary disciples and people of prayer, is all about love.

These two pointers, our calling by Christ and his command to love, should mark out our own care for the ancient churches of our own origin. John Paul II went on to write about the necessity of ‘knowing the Eastern Christian Churches both Orthodox and Catholic, but it is a knowledge based on engagement and the humility of appreciation in openness to the other:

‘I listen to the Churches of the East, which I know are living interpreters of the treasure of tradition they preserve. In contemplating it, before my eyes appear elements of great significance for fuller and more thorough understanding of the Christian experience. These elements are capable of giving a more complete Christian response to the expectations of the men and women of today. Indeed, in comparison to any other culture, the Christian East has a unique and privileged role as the original setting where the Church was born. The Christian tradition of the East implies a way of accepting, understanding and living faith in the Lord Jesus. In this sense it is extremely close to the Christian tradition of the West, which is born of and nourished by the same faith. Yet it is legitimately and admirably distinguished from the latter, since Eastern Christians have their own way of perceiving and understanding, and thus an original way of living their relationship with the Saviour’.(OL I: 5)

More than ever we need to know, love and understand the Churches of the East, beginning with cultivating friendships and when we can supporting them.

In the UK today there are a growing number of Orthodox and Catholic Eastern Churches, I belong to one of them, the Greek Catholic Melkite which small in number is amongst the oldest of the Christian communities. Try to get to know them, understand their history and appreciate their rich liturgical and spiritual traditon, especially if they are in your area or perhaps share a parish, we are after all united in one Lord Jesus the Christ.

This Day of prayer is organised by FACE, Fellowship and Aid to the Christians of the East which has a 170 years of history in working with and helping these communities, its own webpage has a number of helpful links which are being built up: https://facecharity.org/# . But above all pray for them, remembering they are often persecuted and have in the 20th and 21st century produced many martyrs for the faith!

Perhaps the words of Pope Francis on his Apostolic Visit to Iraq in March 2021 might eloquently sum up the hopes of this day of prayer. The Pope visited Ur of the Chaldeans the birthplace of Abraham, our common ‘father in faith’, where he reminded all, that “we are the fruits of Abraham’s journey….”

“Anyone with the courage to look at the stars, anyone who believes in God, has no enemies to fight. He or she has only one enemy to face, an enemy that stands at the door of the heart and knocks to enter. That enemy is hatred. While some try to have enemies more than to be friends, while many seek their own profit at the expense of others, those who look at the stars of the promise, those who follow the ways of God, cannot be against someone, but for everyone. They cannot justify any form of imposition, oppression and abuse of power; they cannot adopt an attitude of belligerence.”(Pope Francis Ur of the Chaldeans March 2021)