Jerusalem: Peace and Via Dolorosa 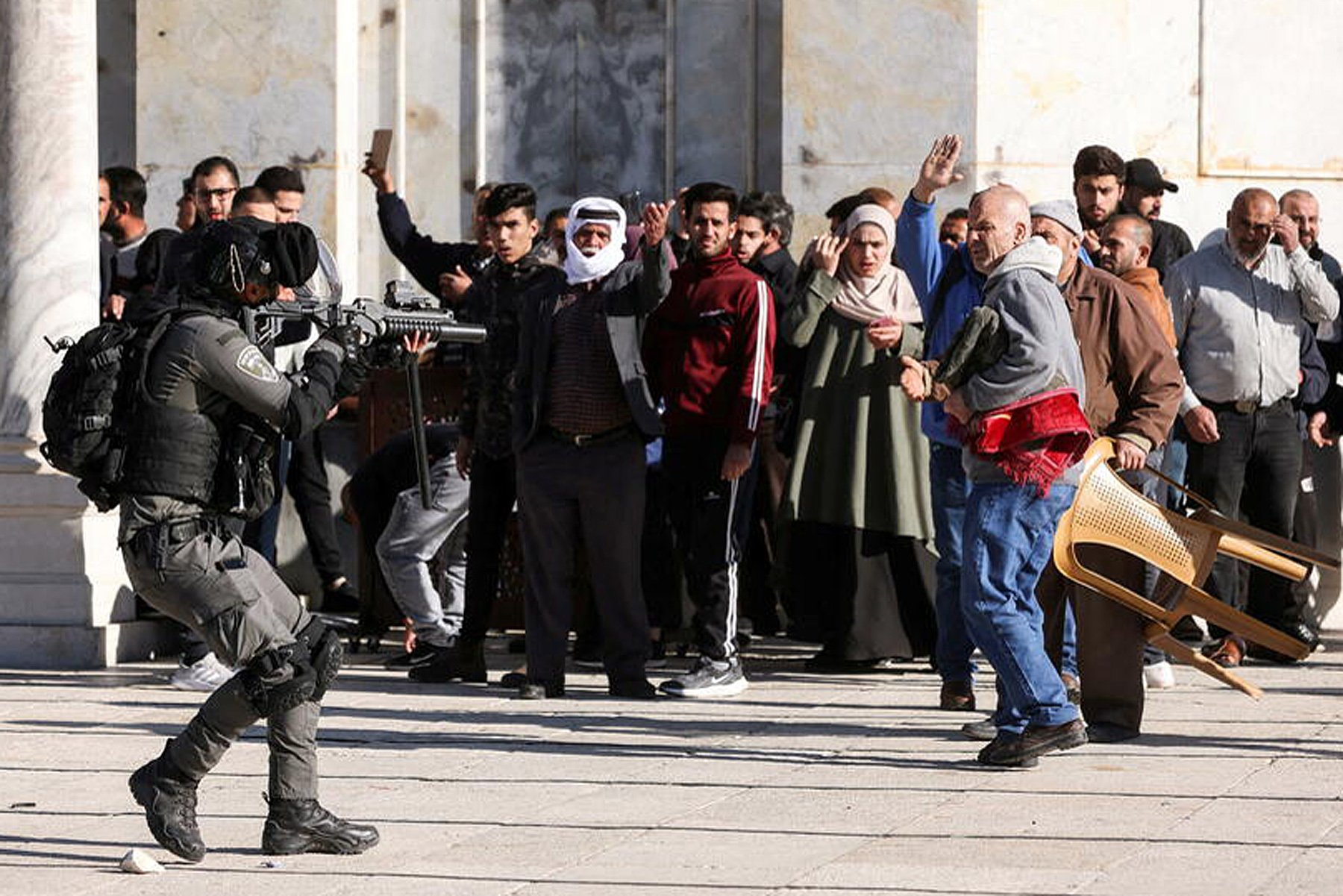 Jerusalem: Peace and Via Dolorosa “Path of Sorrow”

The dawn attack, Friday 13 Ramadan, on Al-Aqsa Mosque worshipers was conceived as neither a surprise nor a sudden one. Indications were previously manifested in the Israeli military operations and invasions of Palestinian cities and camps. Also, similar scenes of bloodshed were witnessed in the Al-Aqsa attack.

As the International Community is preoccupied with the ongoing Russian-Ukrainian military operations, Israel, as usual, ceased such an opportunity to further implement its settlement and expansionist polices. Irrespective of the fact that Al-Aqsa Mosque is an occupied territory, in accordance with International law, yet the dual standards of many Western countries inhibits them from taking an objective and a just stand regarding the Palestinian people. Thus, the stand of the Western counties with respect to Ukraine is an example of such duality.

The Al-Aqsa Mosque has been under continuous attacks by Israel since its occupation in 1967. Most prominent of these attacks are: the attempt to burn it in 1969, Ariel Sharon raged the courtyard of the Mosque in 2000, and subsequent killing of dozens of worshippers which sparked the Al-Aqsa Intifada. Since 1967, Israel has been determined to Judaize the surroundings of Al-Aqsa; accordingly, it developed a strategy of gradually creating a new reality on the grounds.

It is unacceptable to exploit synchronization of the Islamic, Christian, and Jewish calendars as Ramadan coincides with the Christian’s Good Friday, Palm Sunday and Easter, and the Jewish Passover. Such synchronization should have been an opportunity to widen horizons and awareness for managing the Holy sites by discarding political exploitation and religious prejudices. The extent and effect of the deception of foreign thought and ideology which permeated the history of Jerusalem and that of the Palestinian issue, is realized in the words of the American scholar Ian Lustick in his book: “Some Americans share with many Israelis their ideological prejudices.”

In relation to the Arab Jews who lived for centuries side by side with the Muslims, Christians and other religious sects within the Arab Islamic civilization, the issue is basically not one of religious beliefs but one of political conflicts and material interests. Accordingly, it can be emphasized that the cultures of the Orient embody ‘Ishraq’ (enlightenment) and universal human values.

A meaningful religious dialogue amongst the believers of the different faiths is primarily one that achieves justice amongst them, and discards oppression. Doctrines cannot be compatible when exploited to perpetuate oppression, occupation and impose ‘fait accompli’. As well, it is inconceivable that the complex colonial network continues to fulfill its continuous colonial visions at the expense of others, in the “game of nations” struggle in the Eurasia sphere (Europe-Asia).

The Holy books bear witness to God’s justice, His rejection of aggression and destruction of Holy places in His name, as in the words of the prophet Jeremiah: “Will you steal and murder, commit adultery and perjury, burn incense to Baal and follow other gods you have not known, and then come and stand before me in this house, which bears my Name, and say, “We are safe”- safe to do all these detestable things?” (7:9-10).

One of history’s paradoxes that “Urasalem” i.e. “City of Peace” as named by the ancient Canaanites, is currently a City of discord and Via Dolorosa (way of sorrow).

In 1980, the Israeli authorities annexed Jerusalem and declared it the eternal and united capital of Israel, which the international community did not recognize and thereby continued to consider East Jerusalem an occupied city.

However, following the occupation of “Al-Haram-Al-Qudsi” in 1967 many Jewish clergymen forbade the Jews from walking on the “Temple Mount”, which some of them claim that it lies under the Al-Aqsa Mosque. Hence, they believed there is still some aspect of divine presence at the site, and thereby avoiding entering the area where the ‘Holy of Holies’ stood.

In 2014, the Chief Rabbi of the Sephardim criticized members of his community for breaking into Al-Aqsa Mosque yards. He also considered them the prime cause of Israeli bloodshed as they provoked the Arabs, and thereby added fuel to the fire.

Moreover, the emergence of a number of varying religious extremist groups linked with the word “Temple” such as the “Temple Mount Faithful” movement and others, further contributed to the increased incitement to attack Al-Aqsa Mosque.

In the same context, some studies show that segments of the Israeli society tend to be more radicalized regarding Al-Aqsa Mosque, and the courtyards of Al-Haram Al-Sharif. Furthermore, in a 2013 public opinion poll conducted by the Al-Ahram Center for Political and Strategic Studies, 59% supported changing the status quo at Al-Haram Al-Sharif as happened at Al-Haram Al-Ibrahimi in Hebron.

Also, let us not forget the denial of access for Jerusalem’s Christians to the Church of the Holy Sepulchre this Easter, and the absence of joy that had surrounded the world’s holiest Christian churches. Hence, we did not witness a Christian crowd in front of the church’s courtyard as was the case before 1967. This is considered an infringement on the freedom to worship, which is guaranteed on a humanitarian, legal and moral levels and cannot be fragmented or shared.

Today, a group of Jerusalemites emerges again to protect Al-Aqsa Mosque. This was preached about by Prophet Muhammad (Peace be upon him) in the Holy Hadith (Musand Imam Ahmad) .

To conclude, a mosque with the size and status of the Blessed Al-Aqsa Mosque cannot but survive in the heart and mind of the nation. It is the first of the Two Qiblas, the second of the Two Mosques, and the third of the Two Holy Mosques. Also, it is the only mosque that has its name linked to the Grand Mosque referred to in the Holy Qur’an in Surat Al-Isra.